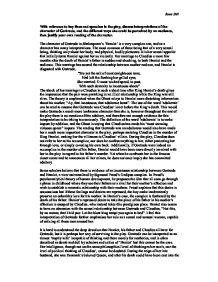 With reference to key lines and speeches in the play, discuss interpretations of the character of Gertrude, and the different ways she could be perceived by an audience, then justify your own reading of the character.

With reference to key lines and speeches in the play, discuss interpretations of the character of Gertrude, and the different ways she could be perceived by an audience, then justify your own reading of the character. The character of Gertrude in Shakespeare's 'Hamlet' is a very complex one, and as a character has many interpretations. The most common of these being that of a very s****l being, thinking only about her body, and physical, bodily pleasures. It is her s****l appetite that initially turns Hamlet against her so violently. Her marriage to Claudius a mere few months after the death of Hamlet's father is sudden and shocking, to both Hamlet and the audience. This marriage has soured the relationship between mother and son, and Hamlet is disgusted with Gertrude, "Ere yet the salt of most unrighteous tears, Had left the flushing her galled eyes, She married. O most wicked speed, to post, With such dexterity to incestuous sheets" The shock of her marriage to Claudius in such a short time after King Hamlet's death gives the impression that the pair were partaking in an illicit relationship while the King was still alive. The theory is emphasised when the Ghost relays to Hamlet more disturbing information about his mother, "Ay, that incestuous, that adulterate beast". ...read more.

She does nonetheless accept that Hamlet's madness may originate from her actions, "His father's death, and our o'erhasty marriage." Despite Hamlet insulting her, Gertrude remains faithful to him, protecting him from Claudius. Although her love for Claudius can be seen as morally wrong due to him being the brother of her late husband, she understands the graveness of her wedding vows and remains equally faithful to him. This shows her as an incredibly loyal person, that despite being gravely insulted by her son, she seems to brush off the insults and remain devoted to him. "Nay but to live, In the rank sweat of an enseamed bed, Stewed in corruption, honeying, and making love", Gertrude is an incredibly strong woman emotionally, "O Hamlet thou hast cleft my heart in twain", undeterred by this, she defends him. This could be through guilt of her actions, but is more likely to be through an unbreakable maternal bond towards him. She is genuinely worried about him, and his downward spiral into madness, "But look sadly the poor wretch comes reading." Gertrude's last words in the play show affection towards her son, "Here Hamlet, take my napkin, rub thy brows. The Queen carouses to thy fortune, Hamlet". ...read more.

Men had more power than women did, as the society was a patriarchal one, so this leaves Gertrude in a confusing position of power. Claudius has more power than her, but he only has this power due to marrying her. As queen, she has more power than a lot of men around her, but as a wife, she is dependent on Claudius. This makes her a very powerful woman for her time, and she uses this power to protect her son. In conclusion, there are many interpretations of the character of Gertrude, the caring affectionate mother, or the s****l adulteress. Personally I think that Gertrude is one of the most complex and appealing characters in the play. Her unwavering devotion to her son despite his obvious disgust at her is to be greatly admired, and she accepts that his madness is partly due to her marriage to his father's brother. Her intelligence is not remarkable, but she shows an amazing aptitude for almost manipulating those around her to protect herself, and those who she cares deeply about. Gertrude's s****l nature is unmistakable throughout the play, this may be her weakness, but she is an emotionally strong woman, who is not malicious but kind hearted and simply wishes everyone that she loves, to be happy and amiable to each other. Rosie Hill ...read more.