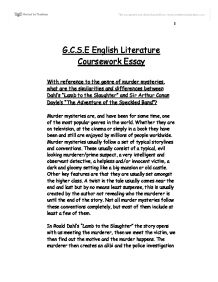 G.C.S.E English Literature Coursework Essay With reference to the genre of murder mysteries, what are the similarities and differences between Dahl's "Lamb to the Slaughter" and Sir Arthur Conan Doyle's "The Adventure of the Speckled Band"? Murder mysteries are, and have been for some time, one of the most popular genres in the world. Whether they are on television, at the cinema or simply in a book they have been and still are enjoyed by millions of people worldwide. Murder mysteries usually follow a set of typical storylines and conventions. These usually consist of a typical, evil looking murderer/prime suspect, a very intelligent and observant detective, a helpless and/or innocent victim, a dark and gloomy setting like a big mansion or old castle. Other key features are that they are usually set amongst the higher class. A twist in the tale usually comes near the end and last but by no means least suspense, this is usually created by the author not revealing who the murderer is until the end of the story. Not all murder mysteries follow these conventions completely, but most of them include at least a few of them. ...read more.

This tries to counteract our instinct of wanting the murderer to be caught and punished. Another way in which Roald Dahl manipulates us into having sympathy for Mary Maloney is by going to great lengths to describe the way she looks, acts and her personality. Doing this establishes her as the main character in the story, so as we know most about this character, she becomes our favourite and the one that we hove the most feelings towards. To help this Roald Dahl also spends very little time describing the looks and characteristics of Mr Maloney (the victim). This means that it is very hard to relate to him and as we know very little about him, we don't care about him that much. As we don't care for or relate to him it makes his murder seem a lot less horrific. However, the villain/murderer in "The Adventure of the Speckled Band" Dr Roylott fits the profile of a typical murderer very well, he is tall, strong, wears black, is evil looking and carries a hunting crop, he is also described by Conan Doyle as having "a thousand wrinkles" "bile-shot eyes" and a "fleshless nose" This description makes you have no sympathy whatsoever for Dr Roylott, it just makes you dislike him even more than you did before we knew what he looked like. ...read more.

Here are some quotes to show this. "The least sound would be fatal to our plans." "Do not go asleep; your very life may depend upon it. Have your pistol ready in case we should need it" "I could not hear a sound, not even the drawing of a breath" My conclusion is that both "Lamb to the Slaughter" and "The Adventure of the Speckled Band" are good and effective murder mysteries, but in extremely different ways. I enjoyed the aspect of humour and absurdity in "Lamb to the Slaughter". I liked the whole storyline of it and how the police ate the evidence at the end. In "The Adventure of the Speckled Band" I enjoyed the challenge of reading it, it was a lot harder to read than "Lamb to the Slaughter", I also enjoyed trying to figure out how the murder took place for myself. It is a clever and very well thought out story that made me really want to find out how Dr Roylott did it! If I had to pick a favourite out of the two stories it would probably be "The Adventure of the Speckled Band", mainly because of the extra challenge it posed to the reader. 1 ...read more.