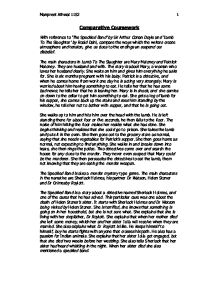 With reference to 'The Speckled Band' by Sir Arthur Conan Doyle and 'Lamb To The Slaughter' by Roald Dahl, compare the ways which the writers create atmosphere and tension, give us clues to the endings and suspend our disbelief.

Comparative Coursework With reference to 'The Speckled Band' by Sir Arthur Conan Doyle and 'Lamb To The Slaughter' by Roald Dahl, compare the ways which the writers create atmosphere and tension, give us clues to the endings an suspend our disbelief. The main characters in Lamb To The Slaughter are Mary Maloney and Patrick Maloney. They are husband and wife. The story is about Mary, a woman who loves her husband dearly. She waits on him and gives him everything he asks for. She is six months pregnant with his baby. Patrick is a detective, and when he comes home from work one day he is acting very strangely. Mary is worried about him having something to eat. He tells her that he has some bad news; he tells her that he is leaving her. Mary is in shock, and she carries on down to the cellar to get him something to eat. She gets a leg of lamb for his supper, she comes back up the stairs and sees him standing by the window, he tells her not to bother with supper, and that he is going out. She walks up to him and hits him over the head with the lamb. He is left standing there for about four or five seconds, he then falls to the floor. The noise of him hitting the floor makes her realise what she has done. She begins thinking and realises that she could go to prison. She takes the lamb and puts it in the oven. She then goes out to the grocery store as normal, saying that she needs vegetables for Patrick's supper. ...read more.

Even after Mr Maloney tells his wife the bad news, there is still tension as the readers wonder what Mrs Maloney will do next. Tension is there throughout the narrative The Speckled Band. Conan Doyle has been very clever in his sentence structure. He writes, "I presume that it is something pressing which they have to communicate. Should it prove to be an interesting case, you would, I am sure, wish to follow it from the outset." This makes the reader want to continue reading to find out who the person is, and what their case might be. It could be robbery, adultery or murder. The tension continues in the narrative, "it is not cold which makes me shiver,' said the woman in a low voice". This makes the reader wonder why she is shivering. It creates suspense, what is she going to say next? She continues to say, "but I have heard, Mr Holmes, that you can see deeply into the manifold wickedness of the human heart. You may advise me how to walk among the dangers which encompass me". This makes the reader read on. What dangers are there? Whom is she talking about when she says, "wickedness of the human heart"? In Lamb To The Slaughter, Dahl gives three main clues to how the narrative might end. First Dahl gives the impression that Mrs Maloney will turn herself into the police because Dahl states, "as the wife of a detective, she knew quit well what the penalty would be. That was fine. It made no difference. ...read more.

"She watched him as he began to sip the yellow drink, and she could see little oily swirls in the liquid, because it was so strong. " this tells us that Mr Maloney is in either an angry, depressed or nervous state, that is why he is having a stronger drink than normal. The language in this narrative is good because it tells the reader exactly what is happening, so that the reader can get an image of it in their head. After Mrs Maloney hits her husband across the head, we know exactly what happened next. Dahl writes, "she stepped back a pace, waiting and the funny thing was that he remained standing there for at least four or five seconds, gently swaying. Then he crashed to the carpet." The language in The Speckled Band is very hard to understand. It is also quite old fashioned. Conan Doyle writes, "last week he herld the local blacksmith over a parapet into a stream." This is the way people spoke in the olden days. The Speckled Band also has a lot of detail, even though it is not really relevant to the narrative. It also mentions that the narrative is set in "April, in the year 83,"this explains why the language is so old fashioned. Conan Doyle also used words like "aperture" which meant that foot - notes were needed to explain what the words meant. The names of the character also show that it is set in the olden days. "Dr Grimesby Roylott, of Stoke Moran." There is also a lot of irrelevant information, "Holmes walked slowly up and down the ill - trimmed lawn." The size of the grass has no relevance to the main plot of the narrative. Manpreet Athwal 11S2 1 ...read more.