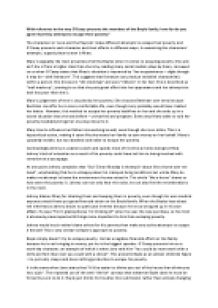 With reference to the way OCasey presents the members of the Boyle family in Juno and the Paycock, how far do you agree that they attempt to escape their poverty?

Transfer-Encoding: chunked ﻿With reference to the way O?Casey presents the members of the Boyle family, how far do you agree that they attempt to escape their poverty? The characters in ?Juno and the Paycock? make different attempts to escape their poverty and O?Casey presents each character and their efforts in different ways. In examining the characters? attempts, a good place to start is Mary. Mary is arguably the most proactive of all the Boyles when it comes to escaping poverty. She acts as if she is from a higher class than she is by reading many social realism plays by Ibsen, conveyed to us when O?Casey states that Mary?s situation is improved by ?her acquaintance ? slight though it may be - with literature?. This suggests that literature can produce snobbish characteristic within a person. She dresses in ?silk stockings? and puts ?ribbons? in her hair. She is described as ?well made-up?, proving to us that she puts great effort into her appearance and her attempts to look less poor than she is. ...read more.

Johnny blames Mary for shaming them and keeping them in poverty, even though his own medical expenses would have put great financial strain on the Boyle family. When the Boyles hear about the inheritance Johnny shows no particular interest because he is too wrapped up in his own affairs. He says ?Tisn?t gramophones I?m thinking of? when he sees the new purchase, so his mind is obviously preoccupied with things more important to him than escaping poverty. Johnny would much rather blame others for his poverty than make any active attempts to escape it himself. This is very similar to Boyle?s approach to poverty. Boyle simply doesn?t try to escape poverty. He has a negative financial effect on the family because he is not bringing in money, yet he is the biggest spender. O?Casey presents him as a work-shy character, an example of which is when Juno tells him ?You could do more work with a knife and fork than ever you could with a shovel?. ...read more.

The poverty is as hard on her as it is to the rest of her family. She has accepted that she will always be working class and makes no attempt to escape what she has decided is her fate in life. She makes a key mistake when she trusts Boyle with the finances after they hear about the inheritance. When everything collapses she realises that nothing more can be done and she leaves with Mary, saying ?I?ve done all I could an? it was all no use?. Despite this Juno is determined to continue working for the sake of herself, Mary and the baby, emphasised when she states ?Then we?ll work together for the sake of the baby?. Juno may never be able to move her family up the social ladder, but she will always work for the sake of others. To conclude, Mary is the only member of the Boyle family that actively tries to escape poverty. O?Casey presents the readers with four very different ways of dealing with poverty through the Boyle family, one of which is escapism. ...read more.