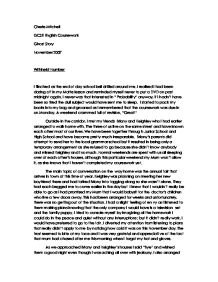 Cherie Mitchell GCSE English Coursework Ghost Story November 2007 Withheld Number I flinched as the end of day school bell drilled around me. I realised I had been dozing off in my Maths lesson and reminded myself never to put a DVD on past midnight again. I never was that interested in "Probability" anyway, if I hadn't have been so tired the dull subject would have sent me to sleep. I started to pack my books into my bag and groaned as I remembered that the coursework was due in on Monday. A weekend crammed full of revision, "Great!" Outside in the corridor, I met my friends Briony and Keighley who I had earlier arranged to walk home with. The three of us live on the same street and have known each other most of our lives. We have been together through Junior School and High School and have become pretty much inseparable. Briony's parents did attempt to send her to the local grammar school but it resulted in being only a temporary arrangement as she refused to go because she didn't know anybody and missed Keighley and I so much. Normal weekends are spent with us all sleeping over at each other's houses, although this particular weekend my Mum won't allow it, as she knows that I haven't completed my coursework yet. The main topic of conversation on the way home was the annual fair that arrives in town at this time of year. Keighley was planning on meeting her new boyfriend there and had talked Briony into tagging along so she wasn't alone. They had each begged me to come earlier in the day but I knew that I wouldn't really be able to go as I had promised my Mum that I would babysit for the doctor's children who live a few doors away. This had been arranged for weeks and unfortunately, there was no getting out of the situation. ...read more.

Luckily, Amanda must have felt my hesitation as she popped her head around one of the many doors and ushered me to "Come this way, I let the kids stay up to meet you." The children were sat at a table in what must have been the kitchen; but appeared to be the size of our garden and garage combined. Amanda had already dressed them in their pyjamas; they were finishing supper while Amanda was applying her make-up. Amanda told me that luckily for me, the children had been to a play park in the afternoon and were both exhausted and ready for bed. I was secretly quite glad as my plans had not involved entertaining them for hours. The doctor entered the room and Amanda introduced him as "Mark" which I was appreciative of as I've always known him just as "doctor." The children both received kisses from their parents and were sent up to bed. Mark gave me his mobile number to contact him in case of any problems and showed me how to work the necessities (the fire, fridge and remote). I needed his tuition as well as everything in the house was so expensive, but so complicated with it! The seats reclined, the fire was controlled by a remote and even the lights had various different settings. After the voices and footsteps had dispersed and I realised I was alone in this unfamiliar mansion, I felt a sense of unease and loneliness. I tried to occupy myself by having a general nosy around a selection of rooms, but the more I persisted, more overwhelming was this feeling of discomfort I was experiencing. It was quite unexplained and I had never suffered from this before, but I began to feel tormented by sensations of nervousness and panic for no apparent reason. Even though I knew full well that the central heating had been activated, there was an eerie chill surrounding me. ...read more.

The considerate policeman had stayed on the end of my mobile all this time and I put it back to my ear to say Thank-You for being so caring and thoughtful. As I began to speak, he interrupted me abruptly and I noticed that the reassuring tone of his voice had now changed to panic. "Frankie, you need to get out of there quick, we've traced the call and he's on the upstairs extension." I took the kids to stand next to the front door and wait for the police. I was getting impatient and wondering why they were taking so long. Then I remembered the gates and realized they would need me to press the intercom button to enable them to enter. I told the kids to remain stood exactly where they were and not to leave each other. I told the older child to hold the toddlers hand and not to let go. He promised me he would. I ran into the kitchen and could hear the police clicking frantically on the intercom. I pushed the button and told the police "Please come quickly, there's somebody in the house." I ran back through the hallway towards the children, making sure I had closed the kitchen door firmly behind me. I tried to comfort them as I knew they were panicking and very frightened. I could hear the familiar sound of gravel crunching under car tyres. I have never been so overjoyed to see the police. I could hear the sound of footsteps running up the drive. It was suddenly interrupted with another recognisable sound. A sound I had heard earlier. My eyes darted towards the kitchen door. I could see the handle moving down slowly and knew why I recognised the creaking noise. My gaze seemed transfixed to the door handle. All sorts of thoughts ran through my head. I woke up with a start to a banging noise. It was the police knocking on the door. "Frankie, it's the police, open the door." ...read more.