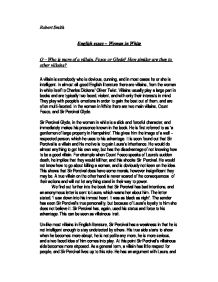 Woman in White - Who is more of a villain, Fosco or Glyde? How similar are they to other villains?

Robert Smith English essay - Woman in White Q - Who is more of a villain, Fosco or Glyde? How similar are they to other villains? A villain is somebody who is devious, cunning, and in most cases he or she is intelligent. In almost all-good English literature there are villains, from the woman in white itself to Charles Dickens' Oliver Twist. Villains usually play a large part in books and are typically two faced, violent, and with only their interests in mind. They play with people's emotions in order to gain the best out of them, and are often multi-faceted. In the woman in White there are two main villains, Count Fosco, and Sir Percival Glyde. Sir Percival Glyde, in the woman in white is a slick and forceful character, and immediately makes his presence known in the book. He is first referred to as 'a gentlemen of large property in Hampshire'. This gives him the image of a well-respected person, which he uses to his advantage. It is soon found out that Sir Percival is a villain and his motive is to gain Laura's inheritance. He would do almost anything to get his own way, but has the disadvantage of not knowing how to be a good villain. For example when Count Fosco speaks of Laura's sudden death, he implies that they would kill her, and this shocks Sir Percival. ...read more.

Marian is obviously offended by Sir Percival, by his short temper, which he often loses. This is another weakness for him as people can appreciate what he is actually like. As in other well-known books, the villain always reveals his motive and Sir Percival does not break this rule. He reveals to Laura that he does not love her and only married her for money, and even when she is crying all he can do is laugh at her, this shows him as a very cold hearted and careless person, much like a villain. He then goes on to not let her have a divorce because of his secret, he feels intimidated when the mention of a divorce occurs and is very forceful to make sure it does not happen. This can be seen as a villainous trait. Count Fosco, on the other hand is a different type of villain from Sir Percival all together. He is one who is very unpredictable and has many different sides to his character. He is first talked of as a decent and generous character when we find out that he saved Sir Percival from robbery. We are led to believe that Fosco is a giving and sentimental man. Later on of course, we see his true colours. Count Fosco is a very complex character with many sides to him, some that allow him to be viewed as a decent man, and others that show him as the deathly-determined villain that he truly is. ...read more.

It is true to say that Sir Percival is a standard model of a villain which everybody would immediately think of, and is very similar in fact to Fagin from Oliver Twist. It is thought from the start of both books that both of the villains are good and upstanding people, when Fagin meets Oliver he is kind and treats him well, similarly to the way that Sir Percival treats Laura. But later go on to reveal their real intentions and plans for the people in question. Another similarity between the two villains is that they are both manipulated by their close associates; Percival by Fosco and Fagin by Sykes. They are both sacred of the power and control that the two have over them and are also scared of what they could do to them. Fosco, on the other hand is much harder to compare to other well know villains in literature. But if anyone, he is similar to Sykes from Oliver Twist. One reason is that he has supreme control over Percival in a similar way that Fagin does over Sykes. They both start off as intelligent and have decent reputations and use their associate's power to their advantage. To conclude, I believe that a cunning and intelligent mind will always beat brute force and money. I believe that because of Fosco's superior knowledge and control of Sir Percival that Percival does not even stand a chance against a villain such as Fosco. This is why I believe that Count Fosco is more of a villain than Sir Percival Glyde. ...read more.