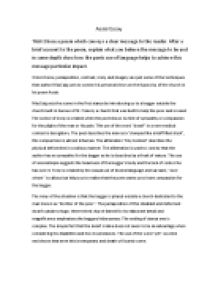 Word choice, juxtaposition, contrast, irony and imagery are just some of the techniques that author MacCaig uses to convey his personal views on the hypocrisy of the church in his poem Assisi.

﻿Assisi Essay TASK:Chose a poem which conveys a clear message to the reader. After a brief account to the poem, explain what you believe the message to be and in some depth show how the poets use of language helps to achieve this message particular impact. Word choice, juxtaposition, contrast, irony and imagery are just some of the techniques that author MacCaig uses to convey his personal views on the hypocrisy of the church in his poem Assisi. MacCaig sets the scene in the first stanza by introducing us to a begger outside the church built in honour of St. Francis, a church that was built to help the poor and in need. The scence of irony is created when the poet shows no hint of sympathy or compassion for the plight of the man or his pain. THe use of the word "dwarf" in a non-medical context is derogatory. The poet describes the man as a "slumped like a half filled stack", this comparrison is almost inhuman. The alliteration "tiny twisted" describes the physical deformites in a callous manner. ...read more.

MacCaig seees him as commercial and materalistic, as he is nothing more than a tour guide collecting tips. MacCaig feels he should be more spirtually minded. MacCaig is trying to convey a sence of dry and sarcastic tone, "i understood the explination / the cleverness", the use of this as a line end shows the poets sceptism and his critism of the priest. Irony is created with the priest who is spending time with tourisits who are passing through. He is not talking to nor caring for the well-being of his parishioners. His natural instincs are commercial not alturistic. Stanza three introduces us to the character of the tourists who follow the priest, swolling every word he utters and in doing so, walk past the begger, ignoring his plight. MacCaig creates a collective noun to describe the group as "a rush of toursits" which is effective since the reader can immediatley grasp the context of the busy toursits. The extended metaphor MacCaig uses "clucking contently" as a sense of imagery of birds that MacCaig describes the tourists to convey that they are proverbially brainless. ...read more.

The simile MacCaig uses "as sweet / as a child's" suggests innocence, while the use of the female pronoun and the mother - to - child relationship offers the connotation of gentleness, love and respect. " A birds when it spoke / to St. Francis" the idea of the Godly man spending time communing with nature further adds purity to the image. The character of the begger describes that the man is an "inncocent" and is harmless. Our attention is drawn to the injustices that he has suffered and we feel real, genuine pity for him. The fact he is having to beg outisde a church in order to support himself to exsist, forces the reader into a reaction of anger at those who have the means to help him and those who have a duty to help him. When he speaks it is the tone of his voice that is important not what he says, it is this that MacCaig marvels at, MacCaig celebrates life and how marvellous it can be. In conclusion I believe MacCaig conveys the clear message of the hypocrisy of the church to the reader. I feel he conveys this in a successful way by the use of word choice, juxtaposition, contrast, irony and imagery. ...read more.