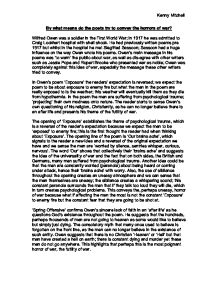 By what means do the poets try to convey the horrors of war? Wilfred Owen was a soldier in the First World War; in 1917 he was admitted to Craig Lockhart hospital with shell shock. He had previously written poems pre 1917 but whilst in the hospital he met Siegfried Sassoon; Sassoon had a huge influence on the way Owen wrote his poems. Owen's main message in his poems was 'to warn' the public about war, as well as dis-agree with other writers such as Jessie Pope and Rupert Brooke who presented war as noble; Owen was completely against this idea of war, especially the message these other writers tried to convey. In Owen's poem 'Exposure' the readers' expectation is reversed; we expect the poem to be about exposure to enemy fire but what the men in the poem are really exposed to is the weather; this weather will eventually kill them as they die from hypothermia. In the poem the men are suffering from psychological trauma; 'projecting' their own madness onto nature. The reader starts to sense Owen's own questioning of his religion, Christianity, as he can no longer believe there is an after life and presents his theme of the futility of war. The opening of 'Exposure' establishes the theme of psychological trauma, which is a reversal of the reader's expectation because we expect the men to be 'exposed' to enemy fire; this is the first thought the reader had when thinking about 'Exposure'. The opening line of the poem is 'Our brains ache', which signals to the reader a new idea and a reversal of the original expectation we have and we sense the men are 'worried by silence, sentries whisper, curious, nervous'. The word 'Our' shows that collectively their 'brains ache' and suggests the idea of the universality of war and the fact that on both sides, the British and Germans, many men suffered from psychological trauma. ...read more.

suggest that they will return home but will be a shadow of their former selves as they many be both physically and mentally wounded from the goings on in the war. On the other hand, their 'ghosts' going home may be the men dead and returning to their homes as a ghost. In the second from last stanza in the poem the idea that the men have wasted their lives and are not going to an afterlife is revisited, 'Therefore were born'. My interpretation of this line is that were the men really only made for war? If so, Owen has shown that war is futile and pointless, which in turn could suggest that life is futile and pointless. Owen's personal belief that war is futile is put to use at great strength in 'Exposure' as it reveals the most poignant horror of war, the futility of it all; the idea of an all-loving God is shown to be non-existent as surely this 'God' would stop war from ever happening. Owen shows death in 'Exposure' to be unnatural and dark and also shows that the men have to face the horrors of war without being able to do anything about it. The idea of death is introduced with 'the air that shudders black with snow' and the passivity to it all as they 'watch them' and observe the 'wind's nonchalance'. The idea of the air shuddering 'black with snow' is a powerful oxymoron. Black is usually associated with death and the previous ideas that the weather (snow/wind) will eventually kill the men link in effectively to make the snow seem unnatural as it is usually white. These new, unusual coloured snowflakes fall and the men 'watch them'; they are passive like in 'Spring Offensive where the men 'stood still'; the wind and snow is 'attacking them' and slowly killing them but they are unable to fight it, as you cannot fight nature. ...read more.

'Under' is death but death is an infinite space because, according to Owen, there is no Heaven. Also, the fact they do not speak of their comrades shows that the soldiers know that Heaven/Hell is not real, which is more shameful as they do not want to sacrifice their lives like their colleagues because they know there is nothing after life. Throughout all of 'Spring Offensive' and, perhaps most significantly, the last stanza it shows that the futility of war is perhaps the most poignant horror of war; there is no reward/Heaven for their sacrifice of life. Therefore, in conclusion, in both 'Spring Offensive' and 'Exposure' Owen successfully puts across his ideas that war is futile and there is no point to it; he does this with a terrific use of metaphors in which he can show the reader just how pointless war truly is. Owen also, perhaps controversially, highlights his fading belief in a Christian God and cannot see how if there really was a 'God' that he could let war take place to start with that would lead to thousands of deaths. He also views the survivors of the war to be outrageous in that they are willing to 'morn' their own men dying but do not hesitate to pull the trigger without remorse on their enemy when in battle; in doing this Owen shows another point that was is universal and that if you are to morn your own dead then you must do this with the enemy you have just killed, whereas in the poems the survivors appear to show no remorse and perhaps enjoy the killing. Owen combines all the beliefs that he holds and creates poems that show the true feelings and ideas of the men in the war, of which was not told to people back home at the time, and he completely dismisses the idea that the dead would go to a 'Heaven' or 'Hell' after they die and views this as a consolatory myth made up to make people feel better when those they knew died. Kenny Mitchell ...read more.