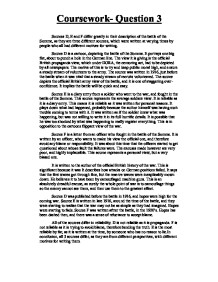 Sources D, E and F differ greatly in their description of the battle of the Somme, as they are three different sources, which were written at varying times by people who all had different motives for writing. Source D is a cartoon, depicting the battle of the Somme. It portrays one big fist, about to punch a hole in the German line. The view it is giving is the official British propaganda view, which under DORA, the censoring act, had to be depicted by all newspapers. The motive of this is to try and keep public moral high, and ensure a steady stream of volunteers to the army. The source was written in 1916, just before the battle when it was vital that a steady stream of recruits volunteered. ...read more.

It was written as if the soldier knew what was happening, but was not willing to write it in its full horrific details. It is possible that he was too shocked by what was happening to really register everything. This is in opposition to the cartoons flippant view of the war. Source F is a letter from an officer who fought in the battle of the Somme. It is written by an officer, who wants to make his view the official one, and therefore avoid any blame or responsibility. It was about this time that the officers started to get questioned about whose fault the failures were. The excuses made however are very poor, and highly implausible. This source represents a personal view, but a very biased one. ...read more.

Source D was published before the battle in 1916, and hopes were high for the coming war. Source E is written in late 1916, around the time of the battle, and they were starting to realise that the war may not be as simple as they had imagined. Hopes were starting to fade. Source F was written aftrer the battle, in the 1920's. Hopes has been dashed then, and there was a sense of reluctance to accept blame. All of the sources differ in reliability. D is not reliable as it is propaganda. F is not reliable as it is trying to avoid blame, therefore bending the truth. E is the most reliable by far, as it is written at the time, by someone who has no reason to lie.In conclusion, all 3 sources differ, as they are from different perspectives, with different motives for writing them. ?? ?? ?? ?? Coursework- Question 3 ...read more.