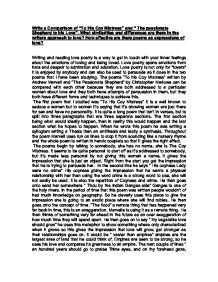 Write a Comparison of &quot;To His Coy Mistress&quot; and &quot; The passionate Shepherd to his Love&quot;. What similarities and differences are there in the writers approach to love? How effective are there poems as expressions of love?

Write a Comparison of "To His Coy Mistress" and " The passionate Shepherd to his Love". What similarities and differences are there in the writers approach to love? How effective are there poems as expressions of love? Writing and reading love poetry is a way to get in touch with your inner feelings about the emotions of loving and being loved. Love poetry spans emotions from hate and despair to admiration and adulation. Love poetry is not only for "lovers" it is enjoyed by anybody and can also be used to persuade as it does in the two poems that I have been studying. The poems "To his Coy Mistress" written by Andrew Marvell and "The Passionate Shepherd" by Christopher Marlowe can be compared with each other because they are both addressed to a particular women about love and they both have attempts of persuasion in them, but they both have different forms and techniques to achieve this. The first poem that I studied was "To His Coy Mistress" It is a well known to seduce a woman but to women it's saying that it's showing women are just there for s*x and have no personality. ...read more.

Which is good imagery giving the impression that if she doesn't go with him, she will live somewhere where nothing grows and nothing happens, which is the imagery of the dessert of it stretching out forever, this again is another threatening thing to say which is frightening this girl. He then goes on to say that her beauty will not last forever, and in this line he uses the words "no" and "nor" in the same line which gives a more negative effect. It then becomes a lot more negative as he tries to frighten her with death " then worms shal try that long presservi'd virginity". Death has a strong influence and is to be feared because everyone is scared of dying. There is also the idea of growing up and being lonely; something that scares everyone as no one wants to be lonely. Another image he portrays is that a lowly worm will take away her virginity when she is dead rather than him, this is a very shocking and disturbing image for her as you get the impression that he is trying to make her feel uneasy. Marvell uses the word "quaint" which suggests that he is patronising the lady and proves that he is playing on her fears, which gives the impression that he has little respect for her, as if he talks down to her. ...read more.

has three verses with no spaces which is like a long argument, unlike (TPSTHL) this poem is more split up, it has seven much shorter four line verses to give more of a rhythm, to me it gives the effect of a song like rhythm, like this man is singing to persuade this women. Again the two poems have similarities and differences when looking at the subject of the poems. Of course they are both about the subject of love, and are both similar as they are trying to get they woman the want, but have different tactics in their ways of getting the woman that they want. (TCM) has very aggressive tactics to get the woman that he wants unlike (TPSTHL) which takes the less threatening way of persuasion. Also I noticed that (TPSTHL) uses a lot more metaphors and similies, has a lot more hidden meanings and the man plays this woman with logic and tries to frighten her. Nothing is said about the woman in either poem, there is no individuality, the poem is more focussed in the love and not the women. Both poems are about what love is actually like and introduce the idea of love in an ideal world, but in my opinion I think that (TCM) is very exaggerated in what he says unlike (TPSTHL) which is a lot more real and in some ways possible. ...read more.