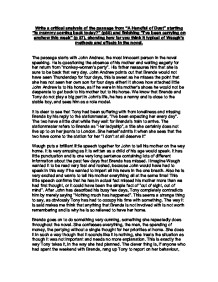 Write a critical analysis of the passage from

Write a critical analysis of the passage from "A Handful of Dust" starting "is mummy coming back today?" (p55) and finishing "I've been carrying on anyhow this week" (p 57), showing how far you think it typical of Waugh's methods and effects in the novel. The passage starts with John Andrew, the most innocent person in the novel speaking. He is questioning the absence of his mother and waiting eagerly for her return from "monkey-woman's party". His father reassures him that she is sure to be back that very day. John Andrew points out that Brenda would not have seen Thunderclap for four days, this is sweet as he misses the point that she has not seen her own son for four days either! It shows how attached little John Andrew is to his horse, as if he were in his mother's shoes he would not be desperate to get back to his mother but to his horse. We know that Brenda and Tony do not play a big part in John's life, he has a nanny and is close to the stable boy, and sees him as a role model. ...read more.

The way it is said makes me think that anything that Brenda is not involved with is not worth remembering and is why he is so relieved to have her home. Brenda goes on to do something very cunning, something she repeatedly does throughout the novel. She confesses everything, the men, the spending of money, the partying without a single thought for her priorities at home. She does it in such a way though that it sounds like it is nothing, she treats the situation as though it was not important and needs no more explanation. This is exactly the way Tony takes it, in the way she had planned. The clever thing is, if anyone who had spent the weekend with Brenda, rang up Tony to report on her behaviour, Tony would already know and so Brenda would be out of trouble. It would be quite extraordinary for anyone to talk to Tony about it though and at the time it was not uncommon for women to have an affair to liven up their lives. ...read more.

it doesn't put him in a better position to say no to her. Brenda asks whether Tony has been "brooding" and he quite defensively says "no". Most of the conversation is like this, Brenda does the talking while Tony makes short replies. By doing all the talking Brenda doesn't give Tony a chance to say no and by the time she is done Tony is agreeing to the flat. I found there were two main points which sprang to mind, regarding Waughs methods and effects in this piece. Clearly this story of marital betrayal relates closely to Waugh's personal experience and he seems to be remarkably generous towards Brenda. Her behaviour is clearly compulsive; "I've found a flat" and she is outspoken "I've been carrying on anyhow this week". Waugh remains very compassionate in his attitude to the faithless Brenda and allows no sign of anger in Tony, which would have been well-justified, he just says "no harm done then." Also, this passage has a great range of ironic implication and it is in parts exceptionally funny; the irony of Tony reacting to Brenda's confession of "carrying on madly with young men" by inferring that buying a Pekingese would have been far worse is pure farce. ...read more.