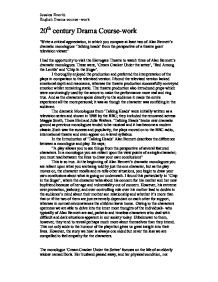 'Write a critical appreciation, in which you compare at least two of Alan Bennett's dramatic monologues 'Talking heads' from the perspective of a theatre goer/ television viewer'

20th century Drama Course-work 'Write a critical appreciation, in which you compare at least two of Alan Bennett's dramatic monologues 'Talking heads' from the perspective of a theatre goer/ television viewer' I had the opportunity to visit the Harrogate Theatre to watch three of Alan Bennett's dramatic monologues. These were, 'Cream Cracker Under the settee', 'Bed Among the Lentils' and 'Chip In the Sugar'. I thoroughly enjoyed the production and preferred the interpretation of the plays in comparison to the televised version. I found the televised version lacked emotional depth and resonance, whereas the theatre production successfully conveyed emotion whilst remaining static. The theatre production also introduced props which were convincingly used by the actors to make the performance more real and ring true. And as the characters spoke directly to the audience it made the entire experience all the more personal; it was as though the character was confiding in the audience. The dramatic Monologues from 'Talking Heads' were initially written as a television series and shown in 1988 by the BBC; they included the renowned actress Maggie Smith, Thora Hird and Julie Walters. 'Talking Heads' broke new dramatic ground as previous monologues tended to be musical and it has become a modern classic. Such was the success and popularity, the plays moved on to the BBC radio, international theatre and even appear on A-level syllabus. In the Introduction of 'Talking Heads' Alan Bennett describes the difference between a monologue and play. He says; "A play allows you to see things from the perspective of several featured characters. In a monologue you are reliant upon the view points of a single character; you must read between the lines to draw your own conclusions" This is so true. At the beginning of Alan Bennett's dramatic monologues you are reliant upon what you are being told by just the one character, but as the play moves on, the character recalls and re-tells other situations, you begin to draw your own conclusions about what is going on underneath. ...read more.

They allow for the occasional changes of scene / position throughout the play and give the actor's time to rest as they talk for the rest of the time. Bennett also uses pauses in 'Bed among the Lentils' for these same reasons. Different voices are introduced as we meet various characters, which are brought to life through Doris, who adds humour and life into the play through them. She tries to change her tone of voice to add variation, for instance the character 'Zulema'. Doris' great dislike of this character is distinctly present in the play- this is often shown through her sarcastic humour. "Which would be all right provided she did dust. But Zulema doesn't dust. She half dusts" Bennett's use of simple yet comic language heightens Doris humour, yet it's to the point and deeply profound. We can see past Doris' humour and tell that she carries deep spite for this character. The problem with other characters being brought to life through Doris is that all the audience knows about the character is Doris' version of them - which is more than likely to be biased, meaning that the audience is reliant upon Doris to successfully draw a conclusion on these characters- with Zulema the picture Doris paints of her is uncaring, but Zulema was right Doris should be in Stafford house- so whether or not Zulema really is as dreadful as Doris makes out is left entirely to the audience to decide. This is very difficult. We can, however, successfully pick up Doris' feelings about the characters. Apart from Zulema the other character Doris talks about a lot is her husband Wilfred. Unlike Doris, Wilfred's character has an easy going nature "Don't worry mother; I've got it on my list" "the garden is my department" Wilfred's easy going nature is something which I think irritated Doris; however, she still misses him and talks about him with love and compassion. ...read more.

Her life was empty without a baby, just like the hall. * As it gets darker she becomes increasingly worried about her legs, they're beginning to stiffen up, she moves back into the sitting room chair. Has she given up? She realises her situation is bad and if she gets help, then her only future is Stafford House. * Finally, it's night-time outside when the policeman arrives and offers his help. There is no light on- she can't reach it. Has she totally given up? Does she only see a bleak and dark future in an old people's home? This is a very clever interpretation of the play as it searches for hidden meanings, however it is the TV Directors own version of the play it's the meaning he sees when he reads the monologue. In the televised version what the director has done is dramatised the play and made it more suitable for the audience watching on television. The sets were particularly sparse and the cameras focused on the main character throughout the entire monologue The monologues are far more intense and dark and perhaps intended for a more matured audience- this is probably why I didn't enjoy them as much as at the theatre. The theatre production however was intended for a wider audience to the one who watch the monologues on TV. At the theatre they have to make the plays appeal to everyone to be sure to make money from the production, so the theatre production enhance the comical side of the monologues so that a range of ages can enjoy them. They also used an elaborate system on the stage- like a merry go round. So that once one monologue had finished the stage would turn round and the next could immediately begin. This was not just impressive for the audience but saved time so they didn't have to re-set the stage. Due to Alan Bennett's writting of the plays and the skill of those re-telling the monologues, both the televised version and theatre production were effectively executed. Jessica Everitt English Drama course-work ...read more.