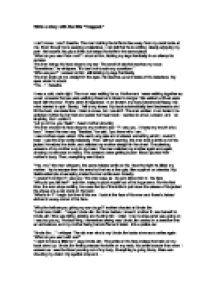 Write a story with the title &quot;Trapped.&quot;

Write a story with the title "Trapped." I can't move. I can't breathe. The man holding the knife inches away from my neck looks at me. Even though he is wearing a balaclava, I can tell that he is smiling, clearly enjoying my pain. He loosens his grip a little, but keeps the knife in the same place. "What do you want from me?" I shout at him, kicking my legs frantically in an attempt to escape. The man brings his face close to my ear. The smell of alcohol reaches my nose. "Sometimes," he whispers, "it's best not to ask any questions." "Who are you?" I scream at him, still kicking my legs frantically. The man looks at me, straight in the eyes. ...read more.

The man moved his face close to my mother's ear. "If I was you, I'd keep my mouth shut, love," I heard the man say. "Besides," he said, "you know who I am..." I saw mothers eyes widen. She went very pale and muttered something which I couldn't hear. I saw the man smile twistedly. Then, without warning, the man took a knife out of his jacket. He raised the knife, and stabbed my mother straight in the chest. The piercing screams of my mother rung in my head. The man stabbed my mother again and again, showing no remorse or mercy. The screams were getting louder. Blood spurted from mother's body. Then, everything went black. "Yes, me," the man whispers, the same twisted smile on his face the night he killed my mother. ...read more.

"Look here, Keith..." began Uncle Jim. But then before I knew it, mother threw herself on Uncle Jim. She was biting, kicking and hurting him. I cried. I had no idea what was going on; I was too young. The last thing I remember seeing was Uncle Jim carried in a stretcher into an ambulance, and my mother being handcuffed and taken into a police car. "Uncle Jim..." I whisper. The old man who is my Uncle Jim looks at me and smiles again. "What do you want with me?" "I want to have a little fun," says Uncle Jim. The smile on his face makes the hairs on my back stand up. Uncle Jim finally presses the knife on my neck, his smile broader than ever. I scream as I see the blood pouring out of my body. Everything is going blurry. Stars are clouding my vision. My eyelids drop and... ...read more.