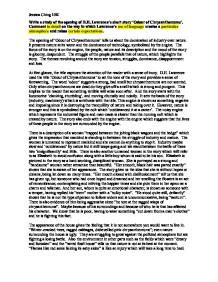 Write a study of the opening of D.H. Lawrence's short story 'Odour of Chrysanthemums'. Comment in detail on the way in which Lawrence's use of language creates a particular atmosphere and raises certain expectations.

Write a study of the opening of D.H. Lawrence's short story 'Odour of Chrysanthemums'. Comment in detail on the way in which Lawrence's use of language creates a particular atmosphere and raises certain expectations. The opening of 'Odour of Chrysanthemums' tells us about the domination of industry over nature. It presents nature at its worst and the dominance of technology, symbolized by the engine. The focus of the story is on the engine, the people, nature and its description and the mood of the story is gloomy, despondent. The struggle of the people parallels that of nature, which highlights the story. The themes revolving around the story are tension, struggles, dominance, disappointment and loss. At first glance, the title captures the attention of the reader with a sense of irony. D.H. Lawrence used the title 'Odour of Chrysanthemums' to set the tone of the story and provides a sense of forewarning. ...read more.

There is a description of a woman "trapped between the jolting black wagons and the hedge" which gives the impression that mankind is standing in between the struggle of industry and mature. The woman is unnamed to represent mankind and she cannot do anything to stop it. Industry maybe slow and 'outdistanced' by nature but it still keeps going and we stand between the battle of these two 'insignificantly' and little. There is also another unnamed woman in the story which will refer to as Elizabeth to avoid confusion along with a little boy whom is said to be his son. Elizabeth is pictured in the story as a hard-working, disciplined woman. She is portrayed as a strong and "handsome" woman rather attractive than beautiful. "Her smooth, black hair was parted exactly" shows that she is aware of her appearance. ...read more.

The appearance of the house gives the feeling that it is not somewhere you would want to live in. "Winter-cracked trees, ragged cabbages, dishevelled pink chrysanthemums"; even nature surrounding the house is ugly. They are struggling to grow against the polluted atmosphere but are fighting a losing battle. Also the environment in other parts such as the fields which were "dreary and forsaken" and the "tarred fowl house" tells us that nature is not at its best at the moment. "Flames like red sores licking its ashy sides" is like an injury which will take a long time to heel. The miners which are unnamed "passed like shadows" is a simile to describe how blackened they were from the coal. Anything to do with mining seems to carry negative connotations. The miners being unnamed shows how little of significance they are compared to the battle of industry and nature. ?? ?? ?? ?? Jessica Ching 10K ...read more.