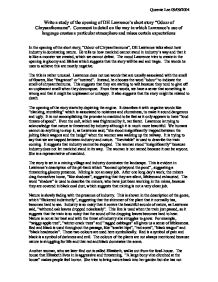 Write a study of the opening of DH Lawrence's short story

Write a study of the opening of DH Lawrence's short story "Odour of Chrysanthemums". Comment in detail on the way in which Lawrence's use of language creates a particular atmosphere and raises certain expectations In the opening of the short story, "Odour of Chrysanthemums", DH Lawrence talks about how industry is dominating nature. He tells us how mankind cannot stand in industry's way and that it is like a monster we created, which we cannot defeat. The mood Lawrence tries to create in the opening is gloomy and lifeless which suggests that the story will be sad and tragic. The words he uses to achieve this are mostly negative. The title is rather unusual. Lawrence does not use words that are usually associated with the smell of flowers, like "fragrance" or "scented". Instead, he chooses the word "odour" to indicate the smell of chrysanthemums. This suggests that they are starting to wilt because they tend to give off an unpleasant smell when they decompose. From these words, we have a sense that something is wrong and that it might be unpleasant or unhappy. It also suggests that the story might be related to death. ...read more.

This line is used when the train just passed, so it suggests that the train is so noisy that the sound of the dropping leaves becomes hard to hear. Nature is not at her best and with the threat of industry she struggles to grow. For example, "twiggy apple tree", "winter-crack trees" and "ragged cabbages" all gives us a sense of lifelessness. Red and black is used throughout the passage, like "scarlet hips", "red sores", "black wagon" and "black headstocks". These two colours are used here symbolically. Red is a symbol of pain and black is a symbol of darkness and evil. The colours of the plants are not always mentioned because nature is struggling for life and that red and black dominates the scene. Another woman, who we later find out is called Elizabeth, walks out from the fowl-house. The house that Elizabeth lives in is aggressive and threatening. "A large bony vine clutched at the house" makes people feel horror. She tries to bring nature back into her garden but she has not totally succeeded. We know this because there is very little life in the garden. ...read more.

His clothing is "too thick and hard for the size of the garments", which suggests that they are poor and has a harsh life, and he is probably resentful because of this. His anger is shown when "he tore at the ragged wisps of chrysanthemums", which is an aggressive and destructive act. Elizabeth takes the flower and holds them "against her face" suggesting that chrysanthemums are a remembrance of someone very close to her. This once again relates to the title, "Odour of Chrysanthemums". "Odour" suggesting death, tell us that the person who she is trying to remember is dead. This person could be the person she was expecting earlier, when she was watching the miners pass by. The opening of the story begins and ends with the engine, which represents industry dominating people's lives. Nature and industry are contrasting antitheses, suggesting that there will be conflict between them. By talking about them, suggests the story will be tragic. The title suggests something dying and there is a lot of tension in the mother and child relationship. The story will be sad because of the negative words used for the house, the nature, the people and the industry. ?? ?? ?? ?? Queenie Lee 09/09/2004 ...read more.