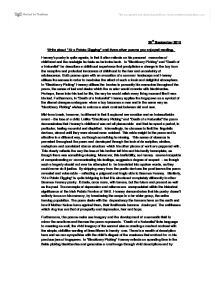 Write about At a Potato Digging and three other poems you enjoyed reading.

26th September 2010 Write about "At a Potato Digging" and three other poems you enjoyed reading. Heaney's poetry is quite agnate, in that it often reflects on his personal memories of childhood and the nostalgia he feels as he looks back. In "Blackberry Picking" and "Death of a Naturalist" he describes a childhood experience that precipitates a change in the boy from the receptive and protected innocence of childhood to the fear and uncertainty of adolescence. Both poems open with an evocation of a summer landscape and Heaney utilises the senses in order to maximise the effect of such a fresh and delightful atmosphere. In "Blackberry Picking" Heaney utilises the berries to personify his memories throughout the poem, the sense of l**t and desire which the reader would connote with blackberries. Perhaps, these infer his l**t for life, the way he would relish every living moment like it was his last. Furthermore, in "Death of a Naturalist" Heaney applies the frogspawn as a symbol of the dismal changes undergone when a boy becomes a man and in the same way as "blackberry Picking" wishes to enforce a stark contrast between old and new. Mid-term break, however, is different in that it explored raw emotion and an indescribable event - the loss of a child. Unlike "Blackberry Picking" and "Death of a Naturalist" the poem demonstrates that Heaney's childhood was not all pleasurable and that he spent a period, in particular, feeling mournful and dispirited. ...read more.

The onomatopoeic images of "Higgledy" and "ragged" imply there was an awkwardness even before the potato famine has even occurred in the poem. This immediately suggests that the prosperity and happiness masked an ominous fear of what was to come. This awkwardness is referenced through the strong alliterative effects, "grubbing" and "grafted" or "pits" and "pus". This Anglo-Saxon vocabulary, which is often monosyllabic, makes use of technical or dialect words. The harshness of such phrases enforces the extent of the damage the famine has caused and how hard the work was that they once did. The flatness of the words also implies great monotony and displeasure at farming. Furthermore, in section three, the reference to macabre lexis develops the image of transgression, as the farmers seem to have been reduced by the deep famine in the country. The reference to "live skulls", which is an oxymoron signifies the incompletition of the farmers, as though they are alive, yet 'dead' - perhaps suggesting without their potatoes, they have no livelihood and therefore, no life. In addition, those who survived were famished - Heaney likens this to the sharp beaks of birds snipping at people's guts. Heaney personifies them with animalistic qualities, as though they have been physically and mentally reduced to viscous acts by the famine. The people are shown as desperate and demoralized - "hungering from birth" - and cursing the ground, by describing it as "the b***h earth". ...read more.

This seems surprising based on the overwhelming and devastating themes the poem carries. Perhaps, this infers that the family attempted to continue normal after the event. However, it is clear there are disturbances within the poem's internal structure. Heaney uses enjambment to demonstrate the way, emotionally; he feels confused and struggles to contain the anger and bitterness associated with losing someone close to you. The wildly fluctuating line lengths, juxtaposed with the strength maintained in the stanza lengths implies that Heaney's emotions are inconsistent and confused. In a poignant act of respect, Heaney breaks the monotony by separating the final line from the main body of the poem. This isolates the phrase and infers the physical separation of his brother and how he feels emotionally lost and without hope. The last line is very final, as though he is signing off his brother's life. To conclude, the four poems deal with the positives and negatives, individually, offering an insight into Heaney's past and heritage. They are very different, in that they structurally and linguistically have different aims. The linguistic devices in "Death of a Naturalist" and "Blackberry Picking" are beautiful and sensuous reflecting the happy memories which Heaney holds in his childhood. This juxtaposes with the issues of depression and uncertainty in "At a Potato Digging" and to a lesser extent, "Mid-Term Break". While, "At a Potato Digging" makes full use of description and a vast array of adjectives and metaphors, "Mid-Term Break" plays on the simplicity to be most effective to the reader. ...read more.