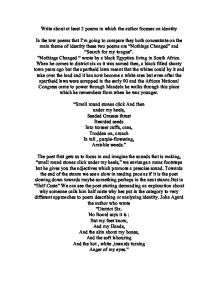 Write about at least 2 poems in which the author focuses on identity In the tow poems that I'm going to compare they both concentrate on the main theme of identity these two poems are "Nothings Changed" and "Search for my tongue". "Nothings Changed " wrote by a black Egyptian living in South Africa. When he comes to district six as it was named then, a black filled shanty town years ago but the apartheid laws meant that the whites could by it and take over the land and it has now become a white area but even after the apartheid laws were scrapped in the early 90 and the African National Congress came to power through Mandela he walks through this place which he remembers from when he was younger. ...read more.

John Agard the author who wrote "District Six. No Board says it is : But my feet know, And my Hands, And the skin about my bones, And the soft labouring And the hot , white ,inwards turning Anger of my eyes." The memory of district six enters his mind it is as if when he sees the place all of his memory's of the place come flooding back to him , and the fact that he used to know this place and perhaps he had special feelings for the place and to see it ripped apart and developed . His anger is evident as it is expressed .This is different to the theme of half caste where a man is just sat only looking for ...read more.

In half-caste a man shows us that many many things could be called half caste , put in too a category but it only seems to be people or more specificly him that is labeled this way such simple things as a composer using both black and white notes iin composing his symphonies he compares that to being half caste .Then he puts another point across that even though people put him into the class as a half caste man he is not half a man he doesnt do things half as well but he but then he tells us to come back tommorow to hear the other side of his story. ...read more.