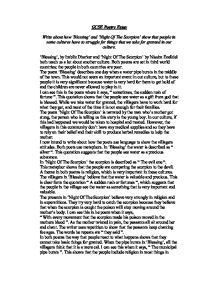 Write about how 'Blessing' and 'Night Of The Scorpion' show that people in some cultures have to struggle for things that we take for granted in our culture.

GCSE Poetry Essay Write about how 'Blessing' and 'Night Of The Scorpion' show that people in some cultures have to struggle for things that we take for granted in our culture. 'Blessing', by Imbilz Dharker and 'Night Of The Scorpion' by Nissim Ezelkiel both teach us a lot about another culture. Both poems are set in third world countries; the people in both countries are poor. The poem 'Blessing' describes one day when a water pipe bursts in the middle of the town. This would not seem an important event in out culture, but to these people it is very significant because water is very hard for them to get hold of and the children are never allowed to play in it. I can see this in the poem where it says, " sometimes, the sudden rush of fortune ". This quotation shows that the people see water as a gift from god that is blessed. ...read more.

The villagers in 'Blessing' believe that the water is valuable and precious. This is clear form the quotation " A sudden rush or fortunes ", which suggests that the people in the village see the water as something that is very important and valuable. The presents in 'Night Of The Scorpion' believe very strongly in religion and in superstitions. They try very hard to catch the scorpion because they believe that when the scorpion is caught the poison will stop moving around the mother's body. I can see this in he poem when it says, " With every movement that the scorpion made his poison moved in the mothers blood ". As the mother twisted in pain, the peasants all sit around her and chant. The writer uses repetition to show that the peasants keep chanting foe ages. The words he repeats are " they said ". In both poems the way that people react to what happens shows that they cannot take basic things for granted. ...read more.

This is described in the poem as follows: " And the naked children screaming in the liquid sunshine ". This reminds me of children in our culture when the kids play in the lawn sprinkler. The metaphor " liquid sunshine " suggests that the water is warm as the sun is heating it up. Similarly, in 'Night Of The Scorpion', the writer shows at the end that mothers have the same love for their children wherever they live. The narrator tells us at the end of the poem, in a separate stanza to make it stand out and seem important, that his mother said, " thank god the scorpion picked me and not my children ". This shows that mothers all over the world have the same concerns about their children and they would prefer bad things to happen to then rather then their children. There poems make me feel glad to live in a culture, where we can take water and medical supplies for granted. By Robert Negus 10AKK ...read more.