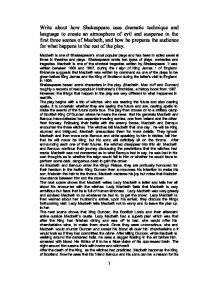 Write about how Shakespeare uses dramatic technique and language to create an atmosphere of evil and suspense in the first three scenes of Macbeth, and how he prepares the audience for what happens in the rest of the play.

Write about how Shakespeare uses dramatic technique and language to create an atmosphere of evil and suspense in the first three scenes of Macbeth, and how he prepares the audience for what happens in the rest of the play. Macbeth is one of Shakespeare's most popular plays and has been in acted several times in theatres and plays. Shakespeare wrote two types of plays, comedies and tragedies. Macbeth is one of the shortest tragedies written by Shakespeare. It was written between 1603 and 1607, during the reign of King James 1 of England. Evidence suggests that Macbeth was written by command as one of the plays to be given before King James and the King of Scotland during the latter's visit to England in 1606. Shakespeare based some characters in the play (Macbeth, Mac duff and Duncan) roughly o records of real people in Holinshed's Chronicles, a history book from 1587. However, the things that happen in the play are very different to what happened in real life. The play begins with a trio of witches who are reading the future and also casting spells, it is uncertain whether they are seeing the future and are, casting spells to make the events of the future come true. ...read more.

Lady Macbeth is then warned about her husband's arrival, upon his arrival, they discuss the Kings forthcoming visit. Lady Macbeth tells Macbeth not to worry and to leave the plan up to her. The next scene shows that King Duncan, the Scottish Lords and their attendant arrive outside Macbeth's castle. Lady Macbeth had a superb plan which was that after the King had finished dining and was off to bed, she would offer his chamberlains wine, to make them drunk. Once they were unconscious, she and Macbeth would murder Duncan and smear his blood all over his chamberlains o it would look as if they had committed the crime. After killing Duncan, while Macbeth is walking around the darkened halls, he sees a dagger floating in the air before him, smeared with blood. He thinks of it to be a false vision of his oppressed brain. The night around him seems thick with horror and witchcraft. After the death of the King, as the witches had predicted, Macbeth becomes the King of Scotland. Now he sees that his friend Banquo and his sons can be a reason for his short lived reign. ...read more.

But it was Macbeth who made the choices that determined his fate. He was not forced to kill Duncan nor any of his other victims. But after he murdered Duncan, Macbeth lost his sanity. The witches were easily able to control his mind. They made him believe that he was invincible, and then he willingly continued to fight when he knew that it would mean his doom. Macbeth's downfall was planned by the weird sisters, but it was Macbeth's own free will that lead him to it. Macbeth is set in a very dull atmosphere, full of jealousy and greed. Macbeth is a courageous Scottish general who is not naturally inclined to commit evil deeds, yet he deeply desires power and advancement and hence kills his King. Lady Macbeth on the other hand pursues her goals with greater determination. Yet, she is less capable of withstanding the repercussions of her immortal act. The motifs of the play are that visions and hallucinations serve as reminders of Macbeth and Lady Macbeths supernatural signs of their guilt. Macbeth is a violent play where most of the killings take place off stage. Throughout the play, the characters provide the audience with gory descriptions of the carnage, with the opening scene where the captain describes Macbeth and Banquo wading in blood, on the battlefield. ...read more.

The question/statement is very clear and for the most part I feel that the candidate has over looked this. Throughout paragraphs 3-9 the candidate simply retells the story. This breaks the flow of the essay and it makes it feel ...

The question/statement is very clear and for the most part I feel that the candidate has over looked this. Throughout paragraphs 3-9 the candidate simply retells the story. This breaks the flow of the essay and it makes it feel jumpy. I would suggest that s/he restructures the essay, clearly looking at each of the first three scenes in turn. For each scene students should discuss: the setting and what about the scene makes it dramatic? or encourages the thought of evil? (such as the use of thunder and lightning in the first scene) How are the characters portrayed? etc. At no point does the candidate mention or discuss how the audience is prepared for what happens next in the play, this is a required element for this essay and needs to be addressed. In addition there is no solid conclusion, but rather a brief explanation of the candidates overall opinion. A good conclusion should summarise your key points, answer the initial question and include your own opinions and reasoning.

The candidate has clearly undergone independent research, which is great and shows their interest the play. However s/he mentions in the first paragraph that Macbeth was written for King James I of England and for the King of Scotland who was visiting. I think they may have got confused here because King James I of England was also King James VI of Scotland. Therefore he ruled over both England and Scotland during his reign. While I implore the candidate for having done additional work towards this essay, it is essential to get your facts straight as a lot of internet resources can be misleading. If in doubt it is best not to mention it at all. There are no quotations used in this essay, it essential to use quotes from the play to back up your ideas and opinions therefore very little analysis is given. Sadly even though the candidate has been promoted to discuss the use of language they fail to do so. It is necessary at this level to discuss the use of metaphors, similes, alliteration and repetition of words and how these add to the play. For example, when discussing the evil atmosphere, the witches often repeat things three times; this use of repetition sets them aside for what we would consider the norm. Also the number three was considered to have magical connotations, therefore words that are repeated three times suggest to the audience the use of magic.

Some of the sentences near the end of the candidateâ€™s essays seem to be random ideas taken from other peoples work. I must remind you that coping the work of others is plagiarism; it is a very serious offence and will cause you to gain zero marks in your English Literature GCSE. I strongly suggest that all candidates ensure that everything is completely their own work. Generally there is a good range of vocabulary used and the essay is fluent. However there are issues with both spelling and grammar that need to be double checked.