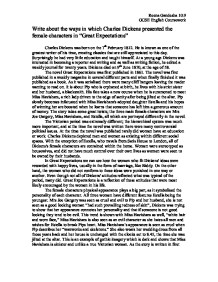 Write about the ways in which Charles Dickens presented the female characters in &quot;Great Expectations&quot;

Write about the ways in which Charles Dickens presented the female characters in "Great Expectations" Charles Dickens was born on the 7th February 1812. He is known as one of the greatest writer of his time, creating classics that are still appreciated to this day. Surprisingly he had very little education and taught himself. At a young age Dickens was interested in becoming a reporter and writing and as well as writing fiction, he edited a weekly journal for twenty years. Dickens died on 9th June 1870, at the age of 58. The novel Great Expectations was first published in 1861. The novel was first published in a weekly magazine in several different parts and when finally finished it was published as a book. As it was serialised there were many cliff hangers leaving the reader wanting to read on. It is about Pip who is orphaned at birth, he lives with his strict sister and her husband, a blacksmith. His fate takes a new course when he is summoned to meet Miss Havisham, a rich lady driven to the edge of sanity after being jilted at the altar. ...read more.

She is in some ways horrible to Pip but not as much as Miss Havisham and Mrs Joe Gargery and this is why she is not unattractive but is seen as an unreal person. All the female characters are bad mannered in different ways; you can see this by the dialogue spoken to other characters. Mrs Joe is exceptionally rude to Pip, Joe, and Orlick. Although Orlick is helping her she still calls him a "fool." For a Victorian woman to call a man such thing is out of ordinary, as women are meant to be respectful. She talks to Pip in a very bad manner "If it warn't for me you'd have been to the churchyard long ago," this shows that she regrets looking after Pip and even though he is her brother she is not kindly to him and beats him. This relates to Dickens idea of women disrupting the balance of the society as women are not meant to beat their husbands. Estella is also disrespectful towards Pip as she repeatedly calls him "boy" which can be very insulting. She is very proud "why, he is a common labouring-boy!" ...read more.

Miss Havisham gets caught on fire, which is a sign that she is going to h**l "Whirl of fire blazing all about her" She realises that she has led Estella on the wrong path "I should have loved her" , but it is too late. Miss Havisham also dies. Estella does not die, but she marries a rich man that does not love her and beats her, "I have been broken", as a result of this she turns into a better person losing some of her beauty but now gaining humanity "The freshness of her beauty may indeed gone" Estella also did not disturb the social balance as much as Miss Havisham and Mrs Joe and therefore she survived at a cost. A Victorian reader of the text would find that all the character getting some form of punishment is good; where as a modern audience would feel for the characters, such as Estella and Mrs Joe that were beaten and would have some sympathy compared to a Victorian reader. Dickens shows with his female characters that every one that does bad, gets some form of punishment and that you get what you deserve. Reena Gandesha 10.9 GCSE English Coursework ...read more.