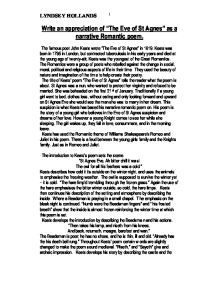 Write an appreciation of &quot;The Eve of St Agnes&quot; as a narrative Romantic poem.

Write an appreciation of "The Eve of St Agnes" as a narrative Romantic poem. The famous poet John Keats wrote "The Eve of St Agnes" in 1819. Keats was born in 1795 in London, but contracted tuberculosis in his early years and died at the young age of twenty-six. Keats was the youngest of the Great Romantics. The Romantics were a group of poets who rebelled against the change in social, moral, political and religious aspects of life in their time. They used the beauty of nature and imagination of the time to help create their poetry. The title of Keats' poem "The Eve of St Agnes" tells the reader what the poem is about. St Agnes was a nun, who wanted to protect her virginity and refused to be married. She was beheaded on the first 21st of January. Traditionally if a young girl went to bed, clothes less, without eating and only looking forward and upward on St Agnes Eve she would see the man she was to marry in her dream. This suspicion is what Keats has based his narrative romantic poem on. His poem is the story of a young girl who believes in the Eve of St Agnes suspicion and dreams of her love. However a young Knight comes to see her while she sleeping. ...read more.

This Gothic image reinforces the medieval era of the poem, and paints a word picture involving the reader. "Fruits and flowers, and braches of knot grass" This detail amplifies the beauty of the poem and adds enchantment. "Splendid dies" describes the magnificent explosion of rich colours in Madeline's room. Again Keats paints a picture, and involves the reader. Keats uses the beauty of nature to describe the colours, "As are the tiger-moths deep damask's wings," The butterfly suggests elegance and charm. Keats spends a lot of time describing Madeline's room, and Madeline undressing. This slows down the mood of the poem making it very exquisite. Madeline is so attractive Keats describes her "Hair a glory, like a saint, she seemed a splendid angle, newly drest! Her hair is shining like a halo and the use of "angle" suggests she is a God-like, beautiful creature, too pretty for this world. The romantic setting has a magical charm "'twas midnight charm." Midnight was always thought to be the witching hour, when all spirits were out. This adds to the enchantment and romance of the poem. Keats keeps emphasising how beautiful Madeline is. The simile "like a mermaid in a sea-weed," compares Madeline to an other attractive creature. ...read more.

And they are gone. These lovers fled away into the storm." From this the reader assumes that they are running off to try and start a new life. There is no proof of happy ending. Then again there is no poof a sad ending, however, the idea that they are running off into a storm suggests unease. Keats ties up all the loose ends in his poem, as it finishes suddenly. "Angela the old died palsy-twitch'd, with meagre face deform: The Beadsman, after thousand aves told, For aye unsought for slept among his ashes cold." He tells what happens to the other characters he had introduced at the beginning. Then the poem is finished. People think he ended his poem suddenly because, he had found out he had tuberculosis and had lost the will to live. Other people think he was so distraught that he could not have a life with his one love Fanny Brown he didn't want his characters to have a life, so his poem finished suddenly. I think he may have just got bored of writing it. Throughout the poem the reader is reminded that it is a narrative, and there is always proof that it is a romantic, even if it just in the features of the room. This poem is a very good example of a narrative romantic poem as it conforms to the all the elements. 1 LYNDSEY HOLLANDS ...read more.