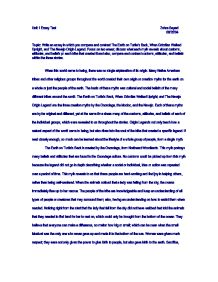 Write an essay in which you compare and contrast The Earth on Turtle's Back, When Grizzlies Walked Upright, and The Navajo Origin Legend. Focus on two areas; discuss what each myth reveals about customs, attitudes, and beliefs

Unit 1 Essay Test Zohra Sayani 09/20/04 Topic: Write an essay in which you compare and contrast The Earth on Turtle's Back, When Grizzlies Walked Upright, and The Navajo Origin Legend. Focus on two areas; discuss what each myth reveals about customs, attitudes, and beliefs pr each tribe that created it and also, compare and contrast customs, attitudes, and beliefs within the three stories. When this world came to being, there was no single explanation of its origin. Many Native American tribes and other religious groups throughout the world created their own origin or creation myths for the earth on a whole or just the people of the earth. The basis of these myths was cultural and social beliefs of the many different tribes around the world. The Earth on Turtle's Back, When Grizzlies Walked Upright, and The Navajo Origin Legend are the three creation myths by the Onondaga, the Modoc, and the Navajo. Each of these myths are by far original and different, yet at the same time share many of the customs, attitudes, and beliefs of each of the individual groups, which were revealed to us throughout the stories. Origin Legends not only teach how a natural aspect of the world came to being, but also dives into the soul of the tribe that created a specific legend. If read closely enough, so much can be learned about the lifestyle of a whole group of people, from a single myth. ...read more.

the Sky Spirit understood this and did not feel the need for creating commotion throughout the entire mountainous region he had created. Attitudes such as the ones discussed above are the key factors to the organization of many Native tribes, including the Modoc. Natives believed that the Indians originated from the grizzly bears the Sky Spirit had created. For this reason, in the Mount Shasta area no grizzly bear was killed by an Indian and when an Indian was killed by a grizzly bear, the body would be burned immediately. This shows that they respect the animal life surrounding them, especially grizzly bears. Many of the beliefs exposed dealt with serenity and nature. They calmly accept what is brought to them in life, like when the daughter did not create a big fuss in having to live with grizzly bears. Curiosity should be kept in its limits and when given instructions they should be followed, or else the consequences will be suffered. The Navajo Origin Legend is a origin legend created by the Navajo people. It seems as though the Navajo people were very simple in what they did or the way they presented something. They were holy people and they cleansed themselves every morning of the 12th day. The legend is short and straight to the point, showing that these people do not mess around and do as they are told. ...read more.

When Grizzlies Walked Upright discussed the custom that the Modoc Natives had of not killing grizzlies, because they believed that they were their ancestors. In The Navajo Origin Legend, they explained to us the origin of husbands and wives. Men and Women living together and being bound by marriage became a custom for the Navajo. Many common beliefs were established in all three tribes. Hard work, team work, never give up, you should always try; even if you don't think you'll have a chance, strength, courage, and many more. These were the basis or foundations of the Native beliefs and were also understood as the morals of all three stories. Each of the individual stories has different attitudes and customs, yet many of the beliefs are commonly shared. Many Natives had many of the same beliefs which were reflected through their origin legends. The Earth on Turtle's Back, When Grizzlies Walked Upright, and Navajo Origin Legend all revealed differing attitudes, customs and beliefs of their own tribes. These three aspects greatly portray the culture and lifestyles of the Native tribes these legends belong to. They not only teach us the variety in culture but also their creativity and ability to create their oral traditions. Creation myths were also a great way to teach the young of the tribe the type of values they would have to live up to and what kind of lives they should lead. It was a great was to get multiple messages across to their own people and the entire world. ...read more.