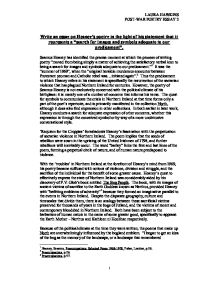 Write an essay on Heaney's poetry in the light of his statement that it represents a &quot;search for images and symbols adequate to our predicament&quot;.

Write an essay on Heaney's poetry in the light of his statement that it represents a "search for images and symbols adequate to our predicament". Seamus Heaney has identified the precise moment at which the process of writing poetry "moved from being simply a matter of achieving the satisfactory verbal icon to being a search for images and symbols adequate to our predicament."1 It was the "summer of 1969", when the "original heraldic murderous encounter between Protestant yeoman and Catholic rebel was...initiated again".2 Thus the predicament to which Heaney refers in his statement is specifically the resurrection of the sectarian violence that has plagued Northern Ireland for centuries. However, the poetry of Seamus Heaney is not exclusively concerned with the political climate of his birthplace: it is merely one of a number of concerns that informs his verse. The quest for symbols to communicate the crisis in Northern Ireland at that time forms only a part of the poet's repertoire, and is primarily manifested in the collection North, although it does also find expression in other collections. In both earlier in later work, Heaney conducts a search for adequate expression of other concerns, whether this expression is through the conceived symbol or by way of a more unobtrusive conversational style. 'Requiem for the Croppies' foreshadows Heaney's fascination with the perpetuation of sectarian violence in Northern Ireland. The poem implies that the seeds of rebellion were sown in the uprising of the United Irishmen of 1798, and further rebellions will inevitably occur. The word "barley" links the first and last lines of the poem, forming a perpetual circle of nature, and of human nature predisposed to violence. With the 'troubles' in Northern Ireland at the forefront of Heaney's mind from 1969, his poetry became suffused with notions of violence, division and struggle, and the sacrifice of the individual for the benefit of some greater cause. ...read more.

The first volume of poems, Death of a Naturalist, takes a youthful perspective and marks the birth of Heaney's poetic art. Grounded in the experiences of childhood, the subject matter of these poems is limited to the immediate physical circumstances of the poet and his own selfish desires and emotions, with no awareness of anything outside himself or his environment. The title poem 'Death of a Naturalist' evokes a richly sensuous world, offering a wealth of exciting possibilities to the child. The child's viewpoint is created through enjambement, which replicates a child's ebullient speech, and by an immature vocabulary: "Miss Walls would tell us how / The daddy frog was called a bullfrog". It is an intensely evocative and descriptive poem, rich in detail and constantly appealing to the senses: "Bubbles gargled delicately, bluebottles / Wove a strong gauze of sound around the smell." But this natural world offers not only imaginative possibilities, but untold terrors and the threat of violence. The reassuring maternal environment is at once transformed into one of disappointment and insecurities: "I sickened, turned, and ran. The great slime kings / Were gathered there for vengeance." Heaney's early poems relate the search for an adequate voice, and 'Digging' forms the first stage in this search: "Finding a voice means that you can get your own feeling into your own words and that the words have a feel of you about them."10 Heaney, sitting inert at a window in an act of composition11, witnesses his father, and imaginatively his grandfather, engaged in creative physical labour. There is continuity across generations, but simultaneously the awareness that the link of rural, traditional labour binding the family has been broken. Rather than the literal act of digging, poetry takes on an excavating role and becomes "a dig for finds", an image that precedes the imaginative parallels of the archaeological digs in Jutland. Thus from the first poem in New Selected Poems, a sense of division is present. ...read more.