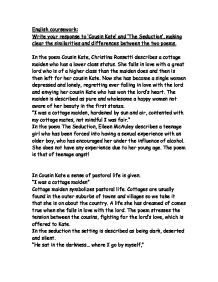 Write your response to 'Cousin Kate' and 'The Seduction', making clear the similarities and differences between the two poems.

English coursework: Write your response to 'Cousin Kate' and 'The Seduction', making clear the similarities and differences between the two poems. In the poem Cousin Kate, Christina Rossetti describes a cottage maiden who has a lower class status. She falls in love with a great lord who is of a higher class than the maiden does and then is then left for her cousin Kate. Now she has become a single women depressed and lonely, regretting ever falling in love with the lord and envying her cousin Kate who has won the lord's heart. The maiden is described as pure and wholesome a happy women not aware of her beauty in the first stanza. "I was a cottage maiden, hardened by sun and air, contented with my cottage mates, not mindful I was fair." In the poem The Seduction, Eileen McAuley describes a teenage girl who has been forced into having a s****l experience with an older boy, who has encouraged her under the influence of alcohol. She does not have any experience due to her young age. The poem is that of teenage angst! ...read more.

The quotes suggest the lord's power and control he has over the maiden, the similes show that he is rough toward the maiden and the quote "he wore her like a glove" suggests that she is easily removed and can be cast away easily. In "the seduction" the girl is described as she is under the influence of alcohol. "Bottles of vodka " this suggests that he is trying to get her drunk in order to seduce her. The poem also describes how the young girl is totally used. "Little slag" This noun phrase shows the man has a total lack of respect for her, and so he knows he will get something out of her because she is young and silly. The man sees her as an easy target due to her mental state, as she is drunk, he must think she is also quiet gullible. Eileen McAuley also describes her when she is pregnant in much detail. In the 8th stanza, the writing contains harsh diction showing that her life is over now that she is pregnant at a young age. ...read more.

She has the rest of her life ahead of her but won't be able to live it now. She is displaying her regret for her experience now. Both poems are similar to some extent. 'Cousin Kate' and 'The Seduction' both describe girls in the same sort of situation. Both stuck and broken because of men. But yet they are different as well because 'Cousin Kate' describes a maiden who falls in love whereas 'The Seduction' describes a girl who under goes a one-night stand because she is drunk. In my opinion I feel more sorry for the maiden in 'Cousin Kate' this is purely because, she has fallen in love with a lord and then out of the blue is cast away like a piece of rubbish for a relative her 'Cousin Kate', it is almost as if she is used to get closer to her cousin by the lord. In which she suffers from lovesickness and is in an unrequited love situation. In 'The Seduction' the young girl chooses to get drunk underage and so what ever happened, it happened by reason. And so I feel no sympathy for the girl at all, she chose to get drunk she must suffer the consequences. By Claire Scott 10T ...read more.