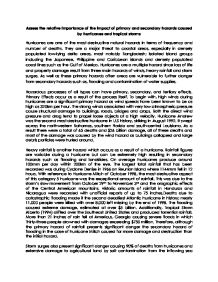 Assess the relative importance of the impact of primary and secondary hazards caused by hurricanes and tropical storms Hurricanes are one of the most destructive natural hazards in terms of frequency and number of deaths. They are a major threat to coastal areas, especially in densely populated low-lying delta areas, most notably Bangladesh; isolated island groups including the Japanese, Philippine and Caribbean islands and densely populated coast lines such as the Gulf of Mexico. Hurricanes are a multiple hazard since loss of life and property damage result from three main hazards of winds, heavy rainfall and storm surges. As well as these primary hazards often areas are vulnerable to further danger from secondary hazards such as, flooding and contamination of water supplies. Hazardous processes of all types can have primary, secondary, and tertiary effects. Primary Effects occur as a result of the process itself. To begin with, high winds during hurricanes are a significant primary hazard as wind speeds have been known to be as high as 320km per hour. ...read more.

More than 21 inches of rain fell at Americus, Georgia causing severe floods in which Thirty-three people drowned with damages exceeding $750 million. Therefore, although the primary hazard of rainfall presents significant danger the secondary hazard of flooding in the case of hurricane Mitch caused far more damage and destruction than the initial hazard. Storm surges also present significant danger causing 90% of deaths from hurricanes and extensive damage to agricultural land by salt contamination from the inflowing sea water. The storm surge results from the piling up of water by wind-driven waves, with their greatest effect on low-lying coasts. However the impact of a surge depends on numerous factors. There are both physical and human variables which play a part in the impact a surge can potentially have on an area. Physical variables such as the height of the tide, wind strength and angle of incidence of the storm are significant when looking at the impact a surge could have. Whereas human variables such as land use, population density and types of building will also be dependable factors. ...read more.

In conclusion it is evident that both primary and secondary hazards present significant dangers resulting in great impact as a result of hurricanes and tropical storms. However, to assess the relative importance of the impact of primary and secondary hazards is questionable. Firstly, it is clear that the type of hazards that occur is dependent on the characteristics of the hurricane, therefore the impact which takes place will depend upon this. Furthermore, the type of hazards that do occur will all be of importance whether they are primary or secondary because they are all likely to have an impact. Although, it is evident that some hazards present a greater danger and these are mainly the primary hazards such as high winds and storm surges. Nevertheless it is apparent that despite heavy rainfall being a primary hazard the secondary hazard of flooding appears to cause far more damage and destruction than the initial hazard as with the case of Hurricane Mitch and tropical storm Alberto. Therefore, on the whole every hazard whether primary or secondary is of great importance, however certain hazards such as high winds, storm surges and flooding present the greatest danger. ...read more.