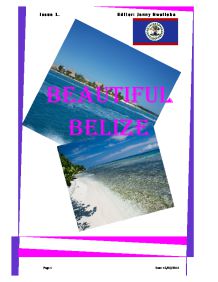 Belize Today in development weekly, we talk about a country which has exceeded their development in just 12,000. I am of course talking about the beautiful Belize. I was sent to Belize to investigate this country unbeknown to most and research on its coral reefs. Before we get on to the issue of the coral reefs, I though it best for you to know a little about Belize. Where is Belize? Belize is located above the equator; it is in the northern hemisphere. It sits next to the Caribbean Sea which is part of the Atlantic Ocean. Belize resides in the continent Central America, by the north of Belize is Mexico and in the south Guatemala. What's Belize like? Sectors of the economy are divided into three: Primary: The primary sector of the economy involves changing natural resources into primary products. Most products from this sector are considered raw materials for other industries. Major businesses in this sector include agriculture, agribusiness, fishing, forestry and all mining and quarrying industries. Secondary: The secondary sector of the economy includes those economic sectors that create a finished, usable product: manufacturing and construction And finally Tertiary: The tertiary sector of the economy (also known as the service sector or the service industry) ...read more.

stress. But why is Development so important? Development is so important to Belize because with it comes a great number of advantages. There are four stages of development in Belize (or indeed of an LEDC). The arc of development of Belize is as follows: NO human settlement (No industry (Belize 12,000 years ago) * During this period, Belize had a completely natural ecosystem * Wide variety of animals and plant * No pollution, no building no industries Human Settlement-villages, small Scale agricultural- (Belize 200years ago) During this period, there were: * Farmers - hunters Primary collected raw materials * Housing - built from local materials Human settlement (Belize 50-60 years old (Secondary) People are beginning to industrialise This development also has their downside as they also bring more pollution, a lot of traffic, massive population growth and slums with no sewage which could lead to more diseases, crime, gangs and drugs. Belize had improved in their standards of living but not their quality of life. Human settlement large towns, cities, (Last 30years) With air travel holiday cheap, international holidays have exploded. This means that beautiful places like Belize are now holiday resort. People stay at towns by the coral reefs. ...read more.

I also interview a worker in a hotel and a local person. The both completely agree with Mr.Heredia and believe that developing the country is the best option for both them and their families. A complex issue, how do we solve a problem like Belize? The question is simple, how do we save the coral reef and keep the stakeholders happy? The view of this reporter is that it is a complex issue and after visiting the country, I do have empathy for all involved. I wasn't in a position to make any drastic changes but I knew someone who could. All I needed to do was sending a simple letter to the Prime Minister of Belize and write to him my suggestions. Below a copy of my letter: Dear Prime minister -Dean Barrow. My name is Jenny Nwalioba a reporter and editor of New and upcoming magazine: 'Beautiful Belize'. I am writing to you regarding the difficult issue situated around the development of Belize and Belize's coral reef. There is no doubt that some of the existing economic activities do cause environmental damages to the reef. However, it would be unwise for the development of Belize to be put on hold. ?? ?? ?? ?? Issue 1. Editor: Jenny Nwalioba Page 1 Date: 12/03/2012 ...read more.