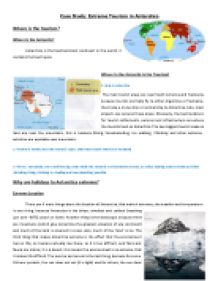 ﻿Case Study: Extreme Tourism in Antarctica Where is the tourism? Where is the Antarctic? Antarctica is the Southernmost continent in the world, it contains the South pole. Where in the Antarctic is the Tourism? 1: Here is Antarctica The main tourist areas are near South America and Tasmania, because tourists normally fly to either Argentina or Tasmania, then take a cruise ship or normal ship to Antarctica. Also, most airports are around these areas. Obviously, the best locations for tourist settlements, services and infrastructure are where the tourists land on Antarctica. The two biggest tourist areas on land are near the mountains, this is because Skiing, Snowboarding, Ice walking, Climbing and other extreme activities are available near mountains. 2: Tourism is mainly near the Antarctic coast, often near South America or Tasmania 3: The ice, mountains, snow and freezing water make the Antarctic environment extreme, as well as making some extreme activities (including skiing, climbing, ice landing and snowboarding) ...read more.

Some other popular normal activities are Station visits, Science support, and Walking. 4: The beautiful Southern Lights attract tourists and scientists to Antarctica. Attractions There are many attractions of Antarctica; for extreme tourists, there is the location, environment, landscape, and there are the extreme activities available. The wildlife is also a strong attraction, as penguins and seals are popular among tourists. All activities available (extreme and normal) are also attractions. The Southern Lights are an example of beautiful, awe inspiring natural phenomenon that attract a huge number tourists, as well as scientists. Many scientists visit Antarctica for many reasons; the fact that it is the most untouched region on the planet makes it one of the most important places to do scientific research. Scientists come from all over the world, to study climate, astrophysics, marine biology, geology, ecology and more. The people who study climate in Antarctica, realize the importance of the Antarctic ice sheet to world climate and sea level. Ecologists and marine biologists study the remarkable food chains of the Southern Ocean. ...read more.

Coping with the Impacts of Tourism In order to reduce the amount of litter and waste dumped in Antarctica, tourist ships discharge all waste well away from Antarctic shores. Tourists are warned of the dangers to wildlife of getting to close to wildlife, most tourists who look at wildlife like the animals and, if they like the animals, they are likely to heed the warnings. Tour operators are also educated about the negative impacts of tourism in certain areas; IAATO directs tourism to be safe and environmentally friendly. The number of passengers on landing ships is limited to 500, for two reasons; it helps to reduce the number of tourists in Antarctica to sustainable limits and it reduces the impacts of oil spills, as the ships are smaller, so spill less oil. The Antarctic Treaty states that tourism is acceptable, but should be limited in Antarctica. Visitors are banned from Sites of Special Scientific Interest, in order to conserve precious wildlife and landscapes. Tourists and Scientists must also gain a permit for any activity they want to partake in, on Antarctica. ...read more.