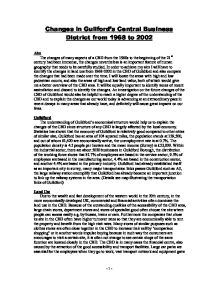 Changes in Guilford's Central Business District from 1968 to 2002.

Changes in Guilford's Central Business District from 1968 to 2002 Aim The changes of many aspects of a CBD from the 1960s to the beginning of the 21st century had been immense, the changes nevertheless is an important feature of human geography that needs to be carefully studied. In order to achieve my aim I will have to identify the changes in land use from 1968-2002 in the CBD of Guildford and also compare the changes that had been made over the time. I will locate the areas with high and low pedestrian counts, and also the areas of high and low land value, both of which would give me a better overview of the CBD area. It will be equally important to identify zones of recent assimilation and discard to identify the changes. An investigation on the future changes of the CBD of Guildford would also be helpful to reach a higher degree of the understanding of the CBD and to explain the changes as our world today is advancing at an extraordinary pace in recent decays in many areas that already have, and definitely will cause great impacts on our lives. Guildford The understanding of Guildford's economical structure would help us to explain the changes of the CBD since structure of any CBD is largely affected by the local economy. Statistics has shown that the economy of Guildford is relatively good compared to other cities of similar size, Guildford has an area of 104 squared miles, the population stands at 129,500, and out of whom 61,420 are economically active, the unemployment rate is at 0.7%. The population density is 4.5 people per hectare and the mean income (Surrey) is �23,000. Within the industrial sector, there are about 5020 businesses in Guildford Borough, the distribution of the working force shows that 81.7% of employees are based in the service sector, 9.5% of employees are based in the manufacturing sector, 4.4% are based in the construction sector, and another 4.4% are based in the primary industry. ...read more.

Analysis: During the process of producing this piece of coursework I have found that the data of 1968 is limited, i.e. the rateable value of 1968... however it is still possible to draw a conclusion with the results available. During the course of the process of identifying and explaining the changes of Guildford's CBD, I have found that the land use maps are the most useful because the land use map was the only 1968 data available, thus I shall start analysing with the land use maps. First we must note that the land use maps of 1968 and 2002 covers different areas of CBD, thus made difficult the comparison. But the CBD had been expanding and transitioning for the past decay, it is already difficult to identify the boundary of the CBD and to compare the shops within the set area. Because the CBD had changed its location, the comparisons of the non-CBD area will have no significant to suite the aim of this project. The data of 1968 goad map will be taken from 28-168 High Street, 35-85 North Street, and 1-25 North Street, and all the data on 2002 land use map will be taken simply because the expansion of CBD area. The figures of different land use are presented on table 4 and graph 4. From the bar graph it is possible to see the increase in the majority of the sectors, especially in chain stores, restaurants/caf�/and pubs and housing, because different areas had been looked at and the total number of shops was increased it is then difficult to judge the level of significance between these sets of values. We must ensure there is a 'real difference' between the two sets of frequencies, i.e. the number of shops of 2002 in each category did not increase because the total number of shops had increased. To see if there is significance between the figures of 1968 and 2002, a test must be implied to which. ...read more.

I have predicted the intense use of land in office buildings etc. in 2002 but the reality turned out to be that there are very few of which visible on the map, because Guildford is, more or less a town of intense commercial activities. (Facts see end part of prediction) Evaluation: It was difficult to reach a conclusion since many of the ideal data was unavailable due to varies reason, in addition to the errors that could have occurred in the collecting and obtaining of the data. The possibility of the occurrences of anomalies can be traced right back to the collection of data, not mentioning the severe limitations of the secondary data itself. The primary data were collected between 11.00 and 12.00, which would not represent the destination of the pedestrians since the intention of whom varies very much at different times of the day and different days of a week. The use of pedestrian count to analyse the internal structure of the CBD is very help to indicate the location of PLVI, the relationship of which has already been explored in the analysis. In this case the restaurant for instance, which would be a popular site at lunch times could, according to my analysis have a high rateable value, but this is not the case according to my data. A more accurate interpretation would be that the overall pedestrian count would have a stronger positive correlation between the rateable values. The data that I have collected clearly could not represent the overall pedestrian count of the day and the absence of such factor could have affected the accuracy of my data to quite some degree. Also during the collection of the data, the land uses had to be categorised into varies types, during the process of which, because some land uses can be classify into two or more categories, not the same judgement can be made by all those who took part in the investigation. ...read more.

Overall rating: 4 out of 5 stars.
This report becomes stronger towards the middle and end. The aim and introduction are a little weak and unspecific and the level of written English makes it a little difficult to understand. However some high level analyses are performed on the data and detailed discussion of the results includes interlinkages within and between data sets. Although some data are still unclear because they have not been shown or included in the report itself, the analysis and explanation of the results shows a high level of geographical knowledge and understanding. The evaluation is strong, looking beyond basic limitations of primary data collection and also extending to show the conclusions may be affected as well as looking to alternative, more detailed data that would improve the accuracy.
However, proof reading is required to improve spelling, punctuation and grammar.