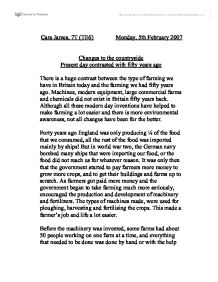 Changes to the countryside, comparing the present day with fifty years ago.

Cara James, 7T (TE6) Monday, 5th February 2007 Changes to the countryside Present day contrasted with fifty years ago There is a huge contrast between the type of farming we have in Britain today and the farming we had fifty years ago. Machines, modern equipment, large commercial farms and chemicals did not exist in Britain fifty years back. Although all these modern day inventions have helped to make farming a lot easier and there is more environmental awareness, not all changes have been for the better. Forty years ago England was only producing 1/4 of the food that we consumed, all the rest of the food was imported mainly by ships! But in world war two, the German navy bombed many ships that were importing our food, or the food did not reach us for whatever reason. ...read more.

They pollute the environment and kill off the local wildlife. Pollution rises and evaporates into the air, so when the rain falls, the rain gets polluted by the pollution in the air. This means that the rivers and streams can become polluted, which kills off fish and wildlife which drink and live in the water. Fifty years ago, fields were very small, but there were a lot of them. Farmers did not need big fields as everything they did was done by hand, but because big machinery is a very big part of modern farming now-a-days, bigger fields are a lot easier to manage. The machinery has been made so big that the small fields are not suitable for the vehicles. The machines find it difficult to turn around in such a small, combined space; so a modern day farmers conclusion to this, is knock down plants, hedgerows or anything possible that gets in the way of extending the fields. ...read more.