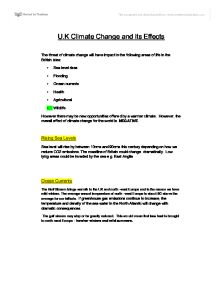 U.K Climate Change and its Effects The threat of climate change will have impact in the following areas of life in the British Isles: � Sea level rises � Flooding � Ocean currents � Health � Agricultural � Wildlife However there may be new opportunities offered by a warmer climate. However, the overall effect of climate change for the world is NEGATIVE. Rising Sea Levels Sea level will rise by between 10cms and 90cms this century depending on how we reduce CO2 emissions. The coastline of Britain could change dramatically. Low lying areas could be invaded by the sea e.g. East Anglia Ocean Currents The Gulf Stream brings warmth to the UK and north-west Europe and is the reason we have mild winters. The average annual temperature of north-west Europe is about 9C above the average for our latitude. ...read more.

The Environment Agency throughout the UK are also looking into the problem of flood defences. These schemes are very expensive and may not be sustainable. Flood plains are supposed to flood - building must be restricted in these areas. However, for many homeowners it is too late. Agriculture For the UK, temperature rises look likely to mean the crops we would normally see growing in the south of the country will be able to be grown further north. Products which haven't been farmed over here before, such as sweetcorn, sunflowers, soya and maize for cereals, could all provide new business for farmers. Farmers will have to cope with droughts and heat waves.They will have to use water more carefully and develop irrigation schemes. Agricultural pests - Animal diseases once only found further south have started to appear in Britain e.g. ...read more.

The essay contains a lot of info on the effects of climate change and neatly organises some of its main effects. However, it lacks information about what climate change really is, how it's caused and arguments against its validity. While ...

The essay contains a lot of info on the effects of climate change and neatly organises some of its main effects. However, it lacks information about what climate change really is, how it's caused and arguments against its validity. While this is not the main focus of the essay, there should be a small introductory paragraph so it can provide a wider angle on climate change.

There is a lot of detail in some of the sections, however Rising Sea Levels is sorely lacking. The use of statistics and actual values to back up points made is good Ã¢â‚¬â€œ but more specifics on what costs will be inferred by each of these effects would be very useful. And while it has a lot of information on primary effects of climate change, the essay needs to write more about the secondary, tertiary etc. effects. For example, what does the wider range of agricultural opportunities really mean, is its benefit significant?

Punctuation and grammar is good for the most part, but simple errors like capitalising 'summer' and 'large', as well as writing 'cms' to represent centimetres let it down, exposing a lack of thorough proof-reading.