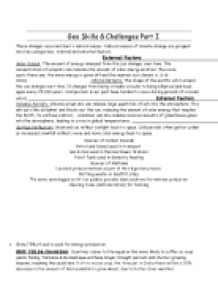 ﻿________________ Geo Skills & Challenges Part I ________________ These changes occurred due to natural causes. Natural causes of climate change are grouped into two categorises, internal and external factors. External Factors Solar Output: The amount of energy released from the sun changes over time. The concentration of sunspots can indicate the amount of solar energy emitted. The more spots there are; the more energy is given off and the warmer our climate is. (0.1% 1980?s) Orbital Patterns: The shape of the earth?s orbit around the sun changes over time. It changes from being virtually circular to being elliptical and back again every 95,000 years. Cold periods in our past have tended to occur during periods of circular orbits. Internal Factors Volcanic Activity: Volcanic eruptions can release large quantities of ash into the atmosphere. This ash acts like a blanket and blocks out the sun, reducing the amount of solar energy that reaches the Earth. To confuse matters... volcanoes can also release massive amounts of greenhouse gases into the atmosphere, leading to a rise in global temperatures. Surface Reflection: Snow and ice reflect sunlight back to space. Cold periods often getter colder as increased snowfall reflects more and more solar energy back to space. Sources of Carbon Dioxide Petrol and Diesel used in transport Gas & Coal used in thermal Power Stations Fossil Fuels used in domestic heating Sources of Methane Livestock produce methane as part of their digestive process. ...read more.

Conservation & enhancement of the environment with new technologies 2) Achievement of social equality by developing countries being allowed to meet basic needs of employment, food, energy, water& sanititation. 3) Economic growth of all countries These ideas have been developed over the past 30 years, and the values of the Brundtland report were reinstated in 1997 @ UNESCO meeting in Paris. Stating: Natural resources should be used reasonably Life should not be harmed by modifications to ecosystems Technological progress shouldn?t harm life on Earth. In the UK 4 key sustainable areas have been identified: 1) Climate change & energy: Reducing greenhouse gas emissions, and preparing for climate change that cannot be avoided 2) Natural resources: the limits of the natural resources that sustain life, so that they are used much more efficiently 3) Sustainable communities: Places that people live and work in, can have rules implemented on them to ensure methods are sustainable, i.e. ecotowns & green energy. 4) Sustainable consumption & production: the ways the products are designed, manufactured used & disposed off. Large companies can achieve & encourage sustainable lifestyles in 4 ways: 1) During manufacturing 2) Recycling packaging material 3) Encouraging customers to recycle 4) Encouraging employees to be more sustainable in the workplace. Nokia ?Communications Company: Concerned people don?t recycle phones 50% of mobile phone users switch phones every year; 44% of phones are left in cupboards & drawers never to be used again Nokia is trying to persuade people to hand in their old phones to recycling centres, because 100% is recyclable If ...read more.

Baka pigmies are employed to show the best trees, causing them to unwittingly destroy their own environment If given work in the sawmill, they aren?t given protective clothing, and the wood is treated with toxic chemicals against parasites and fungus, entering the workers lungs. Tropical Rainforest management: There are a range of management measures that can be used to help protect rainforests from future destruction and damage. Perhaps one of the most effective actions involves governments taking control of forest regions and then banning resource extraction. E.g. In French Guiana the government has refused to allow a gold mine, after research showed that the mine could adversely affect a rainforest reserve and Ramsar-listed wetland. Similarly, the Malaysian government rejected plans to build a coal power station, as the site was too close to an ecological sensitive area. Some of the most effective management strategies have resulted from governments working in partnership with private organisations. In Madagascar, the government teamed up with Swiss perfume manufacturer, Givaudan. The government gave Givaudan sole rights to an area of pristine forest in a deal where the Swiss firm promised to give a percentage of any profits made from perfumes based on local plants to nearby villages to help finance for public projects, such as new schools and health centres. Another good example of a government/private partnership effectively managing resource extraction is in Costa Rica where the government has allowed Merck, an American pharmaceutical firm, to manage an area of forest where plants used in medicines grow in return for a percentage of the profits made from any products sold. ...read more.