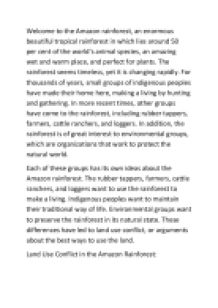 Conflict in the rainforest - what does each group want?

﻿Welcome to the Amazon rainforest, an enormous beautiful tropical rainforest in which lies around 50 per cent of the world?s animal species, an amazing wet and warm place, and perfect for plants. The rainforest seems timeless, yet it is changing rapidly. For thousands of years, small groups of indigenous peoples have made their home here, making a living by hunting and gathering. In more recent times, other groups have come to the rainforest, including rubber tappers, farmers, cattle ranchers, and loggers. In addition, the rainforest is of great interest to environmental groups, which are organizations that work to protect the natural world. Each of these groups has its own ideas about the Amazon rainforest. The rubber tappers, farmers, cattle ranchers, and loggers want to use the rainforest to make a living. Indigenous peoples want to maintain their traditional way of life. Environmental groups want to preserve the rainforest in its natural state. These differences have led to land use conflict, or arguments about the best ways to use the land. Land Use Conflict in the Amazon Rainforest: Tropical rainforests are a type of broadleaf evergreen forest found near the equator, where the climate is warm and wet all year. Scientists use the term biodiversity to describe the variety of plant and animal species that live in a particular area. The great biodiversity of rainforests attracts scientists of different specialties who come to study the flora and fauna there. Other groups of people have different reasons for coming to the rainforest. Some people come to clear land for farming, a process that results in deforestation. Other people are more interested in sustainable development, which means finding ways to use the resources of the rainforest without destroying it. The nickname ?lungs of the Earth? comes from the key role that rainforests play in Earth?s carbon-oxygen cycle. The carbon-oxygen cycle consists of a series of events that turn carbon dioxide into oxygen. ...read more.

For many families in Brazil, the prospect of owning a farm in the Amazon basin had seemed like a distant dream. The Brazilian government did what it could to try to make this dream a reality. The government brought poor families to the rainforest, supplying them with money and free land to enable them to plant their first crops. We Need Land to Feed Our Families Over time, however, the settlers? dream has become a nightmare for many farm families. As native Amazonians had learned long ago, farming in a rainforest is extremely difficult. The thin soil is surprisingly poor in nutrients, which are the substances that make a field fertile. Constant rainfall soon washes away whatever nutrients the soil once contained. As the soil loses its fertility, the amount of food it can produce shrinks. The native Amazonians solved this problem by clearing new fields every few years. Over time, their abandoned fields regained some fertility. However, Brazilian settlers cannot relocate as easily as the native Amazonians. As more settlers have cleared land for farming, opposition to settlers has grown. Native Amazonians, rubber tappers, and ranchers all want the settlers to leave the rainforest. In response, the settlers argue that there is no land for them in other parts of Brazil. They say they must look to the rainforest for land to feed their families. Section 7 ? What Cattle Ranchers Want A Cattle Drive in the Rainforest Cattle like these are a common sight in the Amazon basin. Cattle ranching is now one of the main causes of deforestation in the rainforest. Ranchers say they are raising food for the world. And many countries are happy to buy Brazilian beef. A rainforest may not seem like it could be cattle country, but since the 1960s parts of the Amazon basin have become just that. Although the Amazon cattle ranchers are a small group, they own large areas of rainforest land. ...read more.

The forest grows back in these strips far more quickly than in large clear-cut areas. Buy Products that Protect the Rainforest Consumers can help protect the rainforest by buying products that support sustainable development. Examples include ice creams and cereals made with Brazil nuts. The companies that make these products buy the nuts from native Amazonians, thereby helping native peoples make a living without damage to the rainforest. Another step that consumers can take is to buy products made from wood that is harvested in a sustainable manner. Not all wood is harvested in the same way. Some wood is logged in ways that can destroy a forest, whereas other wood is harvested with care and respect for the forest. Until recently, there was no way for people to know whether they were buying ?good wood.? Then, in the 1990s, logging companies and environmental groups created certification programs to help wood buyers. Under these programs, products from well-managed forests are cer-tified, or labeled. The label tells a buyer that the product comes from ?good wood.? Consumers today can buy many certified ?good wood? products from forests in Brazil, including lumber, charcoal, pencils, furniture, and musical instruments. Section 10 ? Beginning to Think Globally In this chapter, you read about land use conflict in the Amazon rainforest. You learned that the rainforest is an important part of the carbon-oxygen cycle. The rainforest is also rich in biodiversity. However, since the 1960s, loggers, settlers, and ranchers have cleared large parts of the rainforest. Native Amazonians, rubber tappers, and environmental groups continue to oppose this deforestation. Still, the rainforest is shrinking year by year. Not all countries are losing forests as rapidly as Brazil. Some are even gaining forests, a process that is known as reforestation. In some places, the process of reforestation is happening naturally. For example, forests in the eastern United States have taken over abandoned farm fields. In other parts of the world, people are planting trees to create new forests. In the next section, you will examine rates of deforestation and reforestation around the world. ...read more.