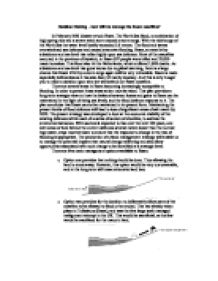 Decision Making how will we manage the Essex coastline?

Decision Making - how will we manage the Essex coastline? In February 1953 disaster struck Essex. The North Sea flood, a combination of high spring tide and a severe wind storm caused a storm surge. With the tidal surge of the North Sea the water level locally exceeded 5.6 meters. The flood and waves overwhelmed sea defences and caused extensive flooding. Essex, an area hit by subsidence and sea level rise relies highly upon sea defences. Most of the casualties occurred in the province of Jaywick, in Essex 307 people were killed and 22,000 made homeless. This flood also hit the Netherlands, which suffered 1,800 deaths. As subsidence and sea level rise grow worse due to global warming, there is a large chance that Essex if hit by a storm surge again will be very vulnerable. Essex is made especially defenceless as it has also been hit had by isostasy. ...read more.

o Option two provides for the decision to deliberately allow parts of the coastline to be allowed to flood or be eroded. This has already taken place in Tollesbury (Essex), and was the first large scale managed realignment attempt in the UK. This would be sacrificial, as the few would be sacrificed for the many in land. o Option three provides for holding the line. This would mean placing a sea wall along the coastline in attempt to hold the shore line and strop it from being eroded. o Option four provides for moving seaward. This would mean defining a line in a seaward direction and build up to it by reclamation. This would also mean more land would be gained, and could be used for economical benefit. o Option five provides for limited intervention. This often encourages the succession of haloseres including salt marsh and sand dunes. These results in the land behind the haloseres are sufficiently protected. ...read more.

We recognize we can't protect Elmsly forever in the face of sea level rise and climate change but we think that other sites which are less important should be realigned over first. And we would like to protect Elmsly for as long as we can." We can see many people have different responses but on consideration of there I have decided to opt for managed realignment as our way of protection the Essex coastline. Areas of the coast are allowed to erode and flood naturally. Usually this will be areas considered to be of low value- e.g. places not being used for housing or farmland. The advantages are that it encourages the development of beaches (a natural defence) and salt marshes (important to the environment) and all at low cost. Managed realignment is a cheap option, but people will need to be compensated for loss of buildings and farmland. This will also allow for shorter more sustainable defences can be built further in land. Allowing these less valuable areas to flood will mean the more densely populated areas will be saved. This land will ultimately be sacrificial. ...read more.

Response to the question is done well. The candidate shows good analysis, research and consideration of a wide range of flood defences, the impact they may have on the people and in light of this the best decision. The ...

Response to the question is done well. The candidate shows good analysis, research and consideration of a wide range of flood defences, the impact they may have on the people and in light of this the best decision. The candidate lacks thorough analysis, and could include a wider range of flood defences to consider, and should also consider economical impacts that each decision may have within a budget.

The introduction is good as it outlines why flood defences are a special consideration in Essex and the impact that flooding has had on the coastline beforehand. The candidate goes on to outline why they have concluded that the present flood defence is not adequate and how they will manage this in the long term which is done to a very high level. They present the problems and what should be done about it. I would have liked to have seen short term action, and a consideration of the economic costs of each operation and the cost to wildlife as these are major considerations for food defences. The candidate displays consideration of each option to a limited degree by only suggesting simple cons behind each one, and the diagrams do not really help because they are limited in what they show. The candidate does include the impact of generic decisions on the people which shows some consideration of the wider geographical impacts and this is analysed to a high level and provides a conclusion that is adequate taking into accounts the peoples view on what should be done.

The 'eager you to make a decision' does not sound right. Minor spelling mistakes and grammar errors present, but otherwise, spelling, grammar and punctuation are all to an okay level. Clear paragraphing and structures are used.