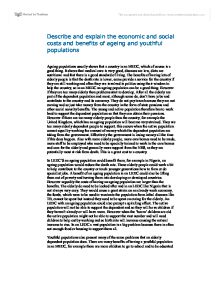 Ageing populations usually shows that a country is an MEDC, which of course is a good thing. It shows that medical care is very good, diseases are low, diets are nutritional and that there is a good standard of living. The benefits of having lots of elderly people is that the death rate is lower, some provide a service for the country if they are still working and often they are involved in politics using their wisdom to help the country, so in an MEDC an ageing population can be a good thing. However if they are too many elderly then problems start to develop. After all the elderly are part of the dependant population and most, although some do, don’t have jobs and contribute to the country and its economy. They do not pay taxes because they are not earning and so just take money from the country in the form of state pensions and other social security benefits. The young and active population therefore has to work hard to support the dependant population so that they can obtain their pensions. However if there are too many elderly people then the country, for example the United Kingdom, which has an ageing population will become very strained. They are too many elderly dependant people to support, this occurs when the active population cannot equal by working the amount of money which the dependant population are taking from the government. Effectively the government is losing money all the time if this does happen. Also with more elderly people, more care homes need to be made, more staff to be employed who need to be specially trained to work in the care homes and care for the elderly and generally more support from the NHS, as they are potentially most at risk from death. This is a great cost to a country.

In LEDC’S an ageing population could benefit them, for example in Nigeria, an ageing population would reduce the death rate. These elderly people could work a bit to help contribute to the country or teach younger generations how to farm or do specialist jobs. A benefit of an ageing population in an LEDC could also be lifting them out of poverty and turning them into developing or developed countries. However arguably the costs of having an ageing population are larger than the benefits. The elderly do need to be looked after and in an LEDC like Nigeria that is not always very easy. They would cause a great strain on an already weak economy, the funds, which were to be used to vaccinate the population from lethal diseases like TB, cannot be spent but instead they need to be spent on caring for the elderly. An LEDC with an ageing population could also prompt a spiralling effect. The active population will not be able to support the dependant and so they will have children if they haven’t already or will have more. However when the ‘boom’ children are old the active population might not be able to support the vast number and will need children to help out by working and so birth rate will increase causing the natural increase to rise. In an LEDC a vast population is a big problem because there is often not enough food or housing to support them all.

Youthful populations also present many of the same problems that an elderly dependant population does. There are many benefits of having a youthful population in an MEDC, for example there are more children to go to school and to be educated and therefore later on will fill jobs and they will contribute a lot to society. However although children do provide a lot of happiness for their parents, there are actually more costs than benefits to having lots of children in an MEDC. This is because children are very expensive to feed, clothe, school and maintain for example doctors and dentists. Children in countries like the United Kingdom cannot work full time until the age of 16 and so do not contribute any money to their families or the economy. So their parents keep spending money on them till they are old enough to work with no return, it is then of course very expensive. The youthful population also comes under the dependant population and so also must be supported by the active population. Like the elderly, if there are too many people in the youthful population then a great strain is placed on the economy.

However in an LEDC the more children the ‘better’. In poor African countries, for example Kenya, It is better for families to have more children because the children can help out on the farmland, do manual jobs and help their parents who very often are ill and need the help.

These children do not cost money like they do in MEDC’S because they very rarely go to school, need clothes or go to the dentists and doctors. So a youthful population in Kenya would provide many benefits however at the same time there will be costs. With an already high death rate and lots of diseases having many children in LEDC’S put the mothers life in great danger, also passing on the HIV/AIDS virus is a great costs of having many children because the disease is then likely to spread even more. Although the children do help their parents produce food on the farmland they do have to be fed as well which means less food for everyone. Also with a high birth rate, high death rate and high infant mortality due to diseases and illnesses many countries in Africa are rooted to poverty in a vicious cycle and so cannot develop.

It is clear throughout that the candidate has understood the question and covers the topics queried; they cover both ageing and youthful populations in both MEDCs and LEDCs, which of course have different effects, showing that they have a basis ...

It is clear throughout that the candidate has understood the question and covers the topics queried; they cover both ageing and youthful populations in both MEDCs and LEDCs, which of course have different effects, showing that they have a basis of geographical understanding. The question would be improved with the addition of an introduction as well. This shows the examiner that the student does understand what is being asked, provides a starting point to plan and structure ideas from, but also gives a good first impression. Definitions of what ageing and youthful populations are, as well as perhaps MEDC and LEDC would improve the answer, and elevate the introduction to a higher level.

Mostly, the candidate has answered the question in a detailed and comprehensive manner. All aspects of the question are covered, and the student clearly links the outlined consequences to how the economy and society would be affected, for example 'can't have jobs and contribute to the country and its economy'. This point was then further developed and carried on well. The youthful population and ageing population could also be linked together maybe, by discussing how a youthful population could become ageing as they grow older if a country develops at the same speed. To some extent, the relevance of including the benefits of each is limited, considering the question only asks the student to look at 'costs' although one sentence on each may be a benefit, depending on the examiner or particular mark scheme.
A summary conclusion may also help to show the examiner that the student can sum up key points and basic ideas.

For the most part, this essay is written very well in terms of spelling and grammar. There is one slight error in terminology, when he/she says that the 'death rate is lower' because this is not quite relevant or true, but it is the life expectancy that should be mentioned instead. Figures and statistics would upgrade this answer as well, particularly as it is discussing costs, a couple of figures on prices to the economy or dependence ratios would be valued highly by the examiner to show they have learnt the information and understand how to apply it. The mentions of countries, such as Kenya and the UK are good, but should be developed more to truly gain the top marks.