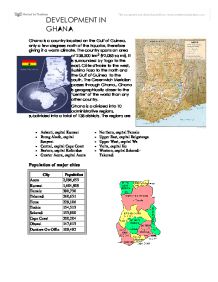 in order to pay off their large bill of maintaining and developing a country the Ghanaians need to broaden their range of goods in order to attract more customers and more costumers means more money for the people and more money for the government. there are also many ways to measure a countries development some of which are GDP (PPP) to find out their financial status and also the life expectancy and mortality rate which will indicate the advances in medical development, some indicators are economic and some social and some socio-economic(both). In comparison to other African countries Ghana is developing at an amazing rate and is well on its way to achieving its milinueim goals. Another thing discussed in this article are the benefits and disadvantages of fair trade and way the rest of the world is acting towards helping these third world countries develop by cancelling dept sending aid in forms of training, business and financial aid among many others. To sum it all up I think that Ghana is on the fast track to becoming a very well developed country. ?? ?? ?? ?? ...read more.