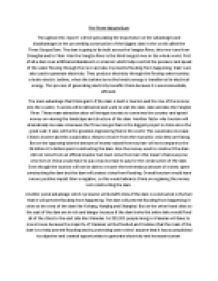 Discuss The Impact Of The Three Gorges Dam

﻿The Three Gorges Dam Throughout this report I will be speculating the importance on the advantages and disadvantages in the proceeding construction of the biggest dam in the world called the Three Gorges Dam. The dam is going to be built across the Yangtze River; this river runs from Shanghai and to Yibin. Also the Yangtze River is the third longest river in the whole world. First of all a dam is an artificial embankment or a barrier which helps control the pressure and speed of the water flowing through the river and also it prevents flooding from happening. Dam?s are also used to generate electricity. They produce electricity through the flowing water turning a hydro electric turbine, when the turbine turns the kinetic energy is transferred to electrical energy. This process of generating electricity benefits China because it is environmentally efficient. The main advantage that China gain?s if the dam is built is tourism and the rise of the income into the country. ...read more.

So 250,000 people living in Wanxian will have to move house because the majority of Wanxian will be flooded and I believe that the main of the dam is to help prevent flooding and by protecting some cities I assume that it has accomplished its objective and created opportunities to generate electricity and increase tourism. The most important economical factors are that the dam will be able to generate efficient electricity and also the Yangtze River would be more navigable by fitting along bigger boats. The dam will have hydro electric powered turbines which will generate 10% of China?s electricity so this gives China a boost economically. Also the procedure used to generate electricity is environmentally friendly because it use?s tidal power to turn the turbine?s. Another factor is that the Yangtze River will be more navigable after the dam is built because of the depth of the water. So it is able to fit along boats 10 times as bigger as the ones before, which means that the Yangtze River could be used as another source of transport to get around the country and also exports and imports could take place along the river. ...read more.

To conclude I believe that this factor is very serious because as we all know dolphins are an endangered species and we humans need to protect them before it?s too late and they are all extinct. So this is a very solid reason for why we should not build the dam. Another significant social factor is that over a million people will need to be re-housed and that many cultural and traditional sites will be flooded. First of all 1.2 million citizens have to be homeless and stressed because they have no where to go. But on the opposing side the government will supply the homeless people with food, water and shelter until they get a home and a job. Also 828 cultural and traditional sites like statues, tombs, monuments, shrines etc; will be flooded. This would cause people to be furious and angry because these are historical figures which have been there for decades. These factors are very important because if the dam is built millions of citizen?s would be affected so the right decision has to be made and the dam should not be constructed. ...read more.