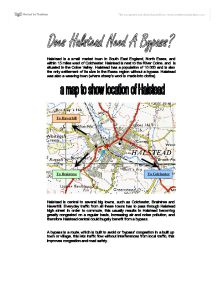 Does Halstead Need a Bypass

Halstead is a small market town in South East England, North Essex, and within 15 miles west of Colchester. Halstead is next to the River Colne, and is situated in the Colne Valley. Halstead has a population of 10 000 and is also the only settlement of its size in the Essex region without a bypass. Halstead was also a weaving town (where sheep's wool is made into clothe). Halstead is central to several big towns, such as Colchester, Braintree and Haverhill. Everyday traffic from all these towns has to pass through Halstead high street in order to commute, this usually results in Halstead becoming greatly congested on a regular basis, increasing air and noise pollution, and therefore Halstead central could hugely benefit from a bypass. ...read more.

* Less pollution in town central. * Lorries would no longer have to drive through the town. * Both noise and air pollution would decrease in town. * Local builders would hugely benefit, from work needed. * It will be quicker for people to travelling to work. Disadvantages: * Expensive, local tax payers of Halstead would compensate. * An increase in noise pollution. * An increase in Air pollution. * Bypass would destroy surrounding environment. * Less customers and income from commuters in the town centre. In the past there have been several proposals for a bypass to be built in Halstead. ...read more.

After analysing my results I conclude that I do not believe that a bypass should be built in Halstead. I think that he environmental impact, and impact on local residents is too big. Taxes would increase enormously and the consequence on businesses in the town will also be huge. The environment would be destroyed, ruining many habitats and bridle paths so horse riders and hikers wouldn't benefit at all. Although I don't believe Halstead needs a bypass, if one were to be built, I reckon that route A is the best choice, as this route goes further around the town than route B, therefore the town of Halstead would be much quieter, and less disturbed by the air and noise pollution. ?? ?? ?? ?? ...read more.

Overall rating: 4 out of 5.
-Well structured report: reader has clear vision of what the report sets out to do and of the location being investigated.
-Clear review of positive and negative impacts, though these could be more detailed with WHY, HOW and secondary impacts acknowledged/discussed. This could also be structured around the categories of social, environmental and economic impacts.
- Well supported conclusion. A consideration of the other viewpoint could be included here eg. 'even though... I still think...'.