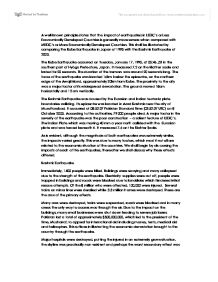 A well-known principle states that the impact of earthquakes in LEDC's or Less Economically Developed Countries is generally more severe when compared with MEDC's or More Economically Developed Countries. This shall be illustrated by comparing the Kobe Earthquake in Japan of 1995 with the Kashmir Earthquake of 2005. The Kobe Earthquake occurred on Tuesday, January 17, 1995, at 05:46 JST in the southern part of Hyogo Prefecture, Japan. It measured 7.2 on the Richter scale and lasted for 20 seconds. The duration of the tremors was around 20 seconds long. The focus of the earthquake was located 16km below the epicentre, on the northern edge of the Awaji Island, approximately 20km from Kobe. The proximity to the city was a major factor of its widespread devastation. The ground moved 18cm horizontally and 12 cm vertically. The Kashmir Earthquake was caused by the Eurasian and Indian tectonic plate boundaries colliding. Its epicentre was located in Azad Kashmir near the city of Muzaffarabad. It occurred at 08:52:37 Pakistan Standard Time (03:52:37 UTC) on 8 October 2005. According to the authorities, 79000 people died. A major factor in the severity of the earthquake was the poor construction - a salient feature of LEDC's. ...read more.

Fires were set off due to destroyed gas pipes and electricity mains causing a further 7500 houses to burn. The roads were gridlocked causing delays in emergency services. 716 aftershocks were recorded and these lasted for several days. Industries such as Mitsubishi and Panasonic were forced to close. The death toll, however, was only 5500, injuries were 40,000 and 180,000 houses were destroyed. The newly opened Kansai Airport, due to its brilliant structural foundations, withstood the earthquake, as well as the Akashi Bridge. However, when we consider the fact that the population density of both areas was similar yet the number of dead, homeless and injured was far more in the Kashmir earthquake than that of the Kobe earthquake. By July, in about 5 months, most of the infrastructure such as water, electricity, gas and telephone services were up and running. Most buildings in commercial areas were repaired and the places affected by fires had been cleared. Rail services were back in service by August. A year later, 80% of the port was functional i.e. all but the Expressway. There was an increase in the technology used to determine information on earthquakes and movements in the region, and steps were implemented to make sure that devastation to that scale would not occur again. ...read more.

This would place too much of a burden on the Pakistani government. Although these long-term causes should be rectified, other short-term causes should be identified. These include that, since Saturday was a normal school day, many school children were studying and as a result were buried under collapsed schools. It was also during the month of Ramadan, when people were taking a nap after their pre-dawn meal, hence they may not have had enough time to escape. Entire villages were simply wiped out like this. In conclusion, although it is expected that LEDC's like Kashmir would be hit worse than MEDC's such as Japan due to their economies, it is nevertheless possible to prevent such grave impacts that took place in Kashmir happening again. The people should be educated with emergency procedures, the government should invest in relevant technology which would indicate and warn them ahead of time when seismic activity was occurring. In addition, the government should outline new guidelines for buildings in which they are earthquake resistant just as Japan did. These would strain the economy in the short-term, although in the long term this would relieve the economy should an earthquake such as this one would take place again. ...read more.

Overall a good review of the impacts resulting from two similar earthquakes. Some weaknesses in the structuring of the essay but otherwise very good.
4 stars

The student shows a clear understanding of the set question with their strong introduction and conclusion. Both clearly introduce and conclude their idea in a coherent and logical manner. The student has considered many different aspects of that would contribute ...

The student shows a clear understanding of the set question with their strong introduction and conclusion. Both clearly introduce and conclude their idea in a coherent and logical manner. The student has considered many different aspects of that would contribute to the difference between natural disasters in LEDCs and MEDCs and supports their statements with relevant material. However, I would suggest that they could highlight the difference in technology more. Such that even the earthquake in Kashmir in 2005 (around 10 years after Kobe), hit Kashmir worse than Kobe in spite of the advancement of technology in that 10 year gap. Such attention to detail would really show the examiner the level of understanding of the student and almost ensure that full marks are gained.

The student offers the typical level of analysis here. I would not say that this has lowered the student's mark at all as this student has included most things that would ensure that they scored the highest possible marks. However, it does not make the student's work stand out from the crowd. Having said this, their response was clear and well developed and a strong and valid conclusion was reached with strong supporting figures.

I only found one punctuation mistake which was a capital letter on the word 'ignorance' when it wasn't the beginning of the sentence. I find this shocking in a piece of work that has been completed to such a high level. Such shows the lack of proof reading and just proof reading for the sense rather than looking deeper and checking spelling, grammar and punctuation. The technical terms were used accurately, however a further definition of MEDC and LEDC is needed to show the examiner that the student understands the classification for the two. Also, I would say that it is correctly written as MEDCs rather than MEDC's and LEDCs rather than LEDC's. I do not think that the short paragraphs work well either. One sentence cannot count as one paragraph and would suggest the student re-look at the how to formulate paragraphs. Other than this, the piece was well structured and logically written.