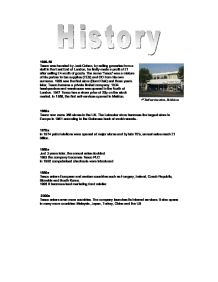 Effects of the local Tesco Superstore

1920-50 Tesco was founded by Jack Cohen, by selling groceries from a stall in the East End of London, he firstly made a profit of �1 after selling �4 worth of goods. The name 'Tesco' was a mixture of his partner in tea supplies (TES) and CO from his own surname. 1929 saw the first store (Burnt Oak) and three years later, Tesco became a private limited company. 1934 headquarters and warehouse was opened in the North of London. 1947 Tesco has a share price of 25p on the stock market. In 1956, the first self-services opened in Maldon. 1st Self service store, St.Albians 1960s Tesco now owns 356 stores in the UK. The Leicester store becomes the largest store in Europe in 1961 according to the Guinness book of world records.. 1970s In 1974 petrol stations were opened at major stores and by late 70's, annual sales reach �1 billion. 1980s Just 3 years later, the annual sales doubled. 1983 the company becomes Tesco PLC In 1982 computerised checkouts were introduced 1990s Tesco enters European and eastern countries such as Hungary, Ireland, Czech Republic, Slovakia and South Korea. 1995 it becomes lead marketing food retailer. 2000s Tesco enters even more countries. The company launches its internet services. It also opens in many more countries: Malaysia, Japan, Turkey, China and the US Year which Tesco entered each country 1994 Hungary 1995 Poland 1996 Czech Rep 1996 Slovakia 1997 Ireland 1998 Thailand 1999 S Korea 2000 Taiwan 2001 Malaysia 2003 Turkey 2003 Japan 2004 Chain This graph shows how many stores are in each country, excluding the UK Since 2003, compared to the present, there is 38 changes. This graph shows gives us a picture that Tesco doesn't seem to have much effect. Many of these changed have their own explanation. Places like Victoria Wine and Hawg & Herps have simply changed their names. ...read more.

Now you can predict the time at which you can catch a bus. Revised junction With the road being widened, it allows more cars helping to ease congestion. Enhanced streetscape New furniture jus to make the centre look neater Tesco has attracted a lot of business, meaning the streets of South Wigston should be busier. As imaginable, there is going to be a bigger flow of traffic heading through the centre. From this perspective, the shop are benefiting because if there are more people noticing the shops, then probably more business would come their way. On top of which, if Tesco were out of a certain product, or didn't stock it, the stores on Blaby road may prove useful, again attracting more business. I also carried out questionnaires to the shops and services. From what I've gathered, the majority of shops and services have implied that they were happy for Tesco to be built. Evidently, Tesco doesn't seem to be taking away business as much as I thought. When interviewing Wigston taxis, I was assured that Tesco has benefited them greatly! "The majority of out pick ups and drop offs are actually at the store which is great for us!" With this the owner commented, "it looks so much better that what was originally there." Get a picture of Wigston taxis! A gentleman from Tuchwood estate agents also agreed that the Tesco was a good idea. He thought it was good for regeneration. "It looks much better than the rubbish that was there before." I also found out that with the store being opened, it has not devalued the price of any of their properties. I think that because it looks more modern, the centre is liked by more people. If you were to drive or walk though South Wigston before the Tesco was opened, you wouldn't think much to the place. However, if you saw a modern building, it would be more inviting to stop and have a look. ...read more.

For this coursework, as a group, we went into South Wigston in lesson times to carry out different tasks to help us. We mapped out all the shops and services in south Wigston and found out what if offered, such as food, beauty etc. We also carried out questionnaires on both the public and shops. We also took some pictures and did some traffic counts. The way we did this was alright I think. We've all come out with quite a lot of information; however it's not that accurate. I think we had a lack of time to collect the relative information to prove anything. I would have liked to have carried out questionnaires to a much wider variety of people (different generations and different genders). I would have liked also to have carried out these questionnaires in different areas to find out how used the store really is. The traffic counts that I've got can't prove anything. I was able to do two at similar times. They were carried out for only 10 minutes each, the amount of cars driving through South Wigston was counted as well as how many of these actually turned into the Tesco car park. It would have been better to carry out these counts at different times, especially at rush hours and 'shopping hours'. This would prove a lot more. I would also have liked to have some figures of traffic counts before the Tesco store opened to have something to compare. Mapping out the shops proved to be quite difficult. On some occasions it was hard to tell if some outlets were vacant, shops or houses. To find the changes wasn't that accurate either. Thinking about it, I had a list of shops sometime in 2003, and a list from 2008, there must have been more changed between these times which means more could have been proved if I had every changed. ...read more.