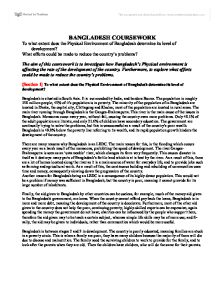 be unconstructive and a waste of valuable money, this meaning the development of the country is very limited, due to the physical features of Bangladesh. The climate in Bangladesh is split into three main phases; the hot season, the cool season and the rainy season. The hot season is between March and June. The cool season is between November and February, and the rainy season is between June to September. The hot season is known to consist of some heavy showers. Depending on the area, the amount of rainfall throughout Bangladesh in the rainy season, ranges between 200cm and 300cm; the north tends to have the most rain. During this season, tropical rainstorms occur also. These can cause very strong winds and more heavy rain. The wind spreads the flood water out more over many miles, causing excess flooding, prohibiting development of the country further. The temperatures in Bangladesh are fairly consistent. The temperatures do drop during the winter, but on average, do not fall to below 10 degrees Celsius. In the summer, the temperatures reach their highest during April and May. These temperatures are roughly 34 degrees Celsius. The annual monsoons have devastating effects on the people of Bangladesh. Firstly, the floods have destroyed many of the Bangladeshi people's homes and many communities, leaving some dead, and some badly injured. Aid has to be called for as the country cannot support itself alone, meaning they have to rely on others. Another effect is that cattle are stranded and worse, drowned in the floods. ...read more.

However, the River Brahmaputra is a useful source of energy, helping to contribute to the development of the country. There are many things which are being done to overcome the Bangladesh's problems. As a result of the country's poor wealth, it is a great struggle to try to pull the country out of its current state of poverty. There already have been, and will be many schemes to try to rule out the problems Bangladesh has and is experiencing. For example, the Flood Action Plan was set up, also, the World Bank plan was established, flood guards have been purchased, and the H.E.E.D scheme was set up. The H.E.E.D Scheme The H.E.E.D scheme was developed and designed by the Tear Fund. The Tear Fund is a Christian Charity, working globally to try to eliminate poverty. The H.E.E.D scheme's aim was to support villages in Bangladesh to push for a better future. H.E.E.D stands for Health, Education, Economic, Development. The scheme operates by addressing the roles of both women and men in society to allow everybody to play a part in trying to overcome problems, together. Women form in groups of about 20 to discuss problems and show that they have a voice and that they also have rights in society. Only the women are able to do this as they are the only ones who have the time. Their main role is to be a housewife, looking after the family, while the men are out working. The men work as farmers all day, therefore they are unable to support the women as much. The H.E.E.D schemes is ...read more.