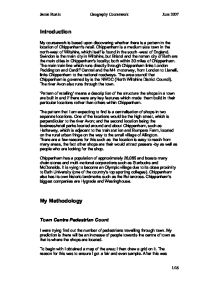 Introduction My coursework is based upon discovering whether there is a pattern in the location of Chippenham's retail. Chippenham is a medium size town in the north-west of Wiltshire, which itself is found in the south-west of England. Swindon is the main city in Wiltshire, but Bristol and the roman city of Bath are the main cities in Chippenham's locality; both within 30 miles of Chippenham. The main train line which runs directly through Chippenham links London Paddington and Cardiff Central and the M4 motorway, from London to Llanelli, links Chippenham to the national roadways. The area council that Chippenham is governed by is the NWDC (North Wiltshire District Council). The river Avon also runs through the town. 'Pattern of retailing' means a description of the structure the shops in a town are built in and if there were any key features which made them build in their particular locations rather than others within Chippenham. The pattern that I am expecting to find is a centralisation of shops in two separate locations. One of the locations would be the high street, which is perpendicular to the river Avon; and the second location being the business/retail parks located around and about Chippenham, such as Hathaway, which is adjacent to the train station and Bumpers Farm, located on the rural urban fringe on the way to the small village of Allington. There are a few reasons for this such as the location is easy to reach from many areas, the fact other shops are their would attract passers-by as well as people who are looking for the shop. ...read more.

Again a clear majority is visible. Around 45% of people said that they walked into the town. This may show that the majority of the people live fairly near the CBD. However the next largest chunk was by motor vehicles of various types. Cars were the main use however bus was a popular choice. Public transport was widely used, which is a good sign of the usefulness of the links Chippenham has. Finally the numbers of people cycling were small, possibly due to the pedestrianisation I am investigating next. My next graph (above) shows peoples opinions on the pedestrianisation of the Chippenham high street. The vast majority show a strong preference for it with 30 people displaying a +3 response. A fairly strong positive correlation of the results can be seen with the next largest station being +2 This graph (below) shows the items the shoppers usually buy when coming to Chippenham. There isn't as clear a majority as there was on the previous graphs however the main choice of food exceeds the others my at least 17 and electrical goods is clearly the least bought at 19. There are few large electrical goods stores in Chippenham's CBD whilst there is a large out of town store so this could be an explanation. My next graph (below) illustrates the proportions of men and women who were interviewed in the town centre. A clear domination of women was seen. This could revert back to the hunter gatherer instinct where the men are out providing and 'hunting' for the food and resources needed to support his family. ...read more.

This is because due to the increased population size, shops would need to meet demand, and would therefore increase in size and number. Data Graph This graph, and the attached data, clearly support the idea that population increases the number of services in any given town. For example, Chippenham, with a population just over double that of Calne, has almost 3 times the individual services. Analysis Shop Locations High/Low Order Shop Locations From my findings I am able to deduce that High-Order goods stores tended to be in the town centre in towns the size of Chippenham and smaller. However I also noticed that a trend began to happen in Chippenham as high order goods stores began to follow the doughnut effect to relocate to the outside of town. Shops such as the Honda Garage, Sainsbury's and B&Q illustrate and follow this movement. This tendency was noticeable in many towns the size of Chippenham or bigger. The vacant spaces left by the high order stores which left the high street have let many low-order good structures take their places. There are still a few high-order stores in the town centre, but these are decreasing as the doughnut effect comes into effect as Chippenham grows. Chain/Local Store Locations Most of the chain stores occupy the space outside Chippenham. The reasons for this would be factors such as cheaper land for them to expand into. The other chain stores were in the prime land of the shopping centres as Borough Parade and Emery Gate. Shops such as Argos and New Look occupy those structures. Local stores tended to fit in around these shops in smaller plots and less open areas. Pedestrian Spread ?? ?? ?? ?? Jamie Bustin Geography Coursework June 2007 1/16 Jamie Bustin Geography Coursework June 2007 16/16 ...read more.