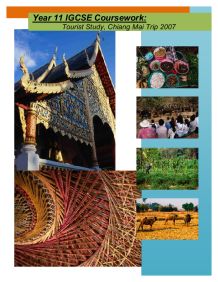 AIM: To investigate the Question: "What are the characteristics of foreign visitors to Chiang Mai, Thailand?" Brief Information As Thailand's largest and most religious city, even though, tourism in Chiang Mai has not been as important as in Bangkok, the capital of Thailand, tourism is an essential part of the Chiang Mai's economy. In recent years, Chiang Mai is starting to be one of the most visited tourist destination of Southeast Asia. Due to this, Chiang Mai have change with a wide range of changes in tourism, which includes; an increase in wealth, mobility, accessibility and leisure times, improvements in transport and technology, changes in life-style, interest and demands, and lastly a greater awareness of places due to coverage by the media and TV. In the past, Chiang Mai was mostly used as a defensive city against the attacks from Burma with many constructed useful structures. However, in more recent years it began turning towards the Tourism industry mostly attracting the tourists with the ruins of 13th to 14th-century temples with some of the most beautiful and revered in the Buddhist world. Besides temples, its refined handicrafts, mountain scenery and its beautiful climates also attracts thousands of foreign tourists to visit every year. Each year, approximately 3.5 million tourists visit Chiang Mai. Of this amount, 1.5 million (43%) are foreigners. (1) For Chiang Mai's historical sites, Wat Chedi Luang Temple is one of the most popular Chiang Mai tourist attractions. This temple dates back to 1441, which was built according with a large Lenna-style stupa and has a stone slab inscription engraved in the year 1581. For sceneries, Doi Sutherp is a spectacular mountain range. Its Chiang Dao Caves are well-known tourist attractions of Chiang Mai, especially for adventurers. A set of five caves housing age-old images of Buddha, these caves are perfect for trekking and exploration. Other must-see tourist attractions in Chiang Mai such as the Doi Ang Khang, Mero Tribal Village, Wat Phra Singh, and Chiang Mai Zoo. ...read more.

Question 1 asks my interviewees whether they are going to stay in Chiang Mai as their final destination, or are they going to fly to somewhere else later. According the questionnaires, fifty-two out of the seventy questionnaires shows that the interviewee stays in Chiang Mai as their final destination. While the other eighteen out of seventy questionnaires show that the interviewee are going to fly to other destinations later. In addition, the table beneath shows a pattern that even there is an uneven patter of having a relatively low percentage between each two locations .The three locations that have the lowest percentage compared to the other percentages in other locations. This may mean that these locations are mostly well-known in the local population or visitors who had been to Chiang Mai before and that they are traveling without the lead of a tour guide. Therefore, these visitors might want to travel to other places in Thailand. On the other hand, while these are unpopular sites that travel agencies would not bring their customers to so therefore, these visitors would not be able to travel to other places in Thailand. Also, according to the pie chart the percentage of tourists going to stay in Chiang Mai as their final destination is higher (with 72%) than tourists that are going to other destination afterwards (with 28%).This result shows that my first hypothesis is suggested wrongly. Most tourists visit Chiang Mai as their final destination, and not as a stopover. Question Choices Readings 1 Stopover 18 Travelling 52 Elephant Camp Walking Street Temple #1 Temple #2 Temple #3 Shopping Mall Night Bazaar Overall Percentage Final Destination 86% 69% 85% 39% 80% 69% 78% 72% Stopover 14% 31% 15% 61% 20% 31% 22% 28% Question 2: How long are you going to stay in Chiang Mai? Question 2 asks my interviewees, how long are they going to stay in Chiang Mai. ...read more.

So therefore, more people would use this chance to eat more Thai food, during their stay in Chiang Mai. Evaluation * Benefits: * Throughout my process of working on this coursework, I have learnt how to communicate with people that I do not know, how to cope with different people. * How to design a good questionnaire and how to grab hold of the time and complete a range of questionnaires. * Problems: * During my interview with the foreign tourists in Chiang Mai, I found out that not many of them were willing to accept my questionnaire. Many tourists would just pretend they cannot see me or just walk away while I was asking my questions. This could create a difficulty in my research. * In this coursework, my collected data are relatively biased. This is because during my seven days trip, I had asked foreign tourists to complete all of my seventy questionnaires and all of them were either foreigners or English-speaking Asians. This could make my evidence when concluding much stronger. * Solutions: * Because this is a personal problem, there is no correct solution to this problem. But next time, I would try to improve on my asking technique and the attitude towards my interviewee. This is because, sometimes, when the tourists didn't accept my questionnaire, I would become irritated. * If I had the chance again, I would try to type my questionnaire in different kinds of languages so that I could ask more different people and not only asking English-speaking people. * How the "study" could be improved: * My questions in the questionnaire could be a bit more specific. * I could create more minor questions related to the major question. * I could have an interview with the local tour guide and the foreigner tour guide to know more about the culture in a local citizen perspective, and in a foreigner perspective. * The trip could have more sites for us to collect more data from our questionnaire * I could read some books about the culture of Chiang Mai, Thailand. ...read more.