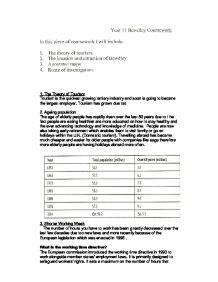 Geography Courswork Does Tourismn Have A Negative Impact On Bewdley

1. The Theory of Tourism Tourism is the quickest growing tertiary industry and soon is going to become the largest employer. Tourism has grown due too 2. Ageing population The age of elderly people has rapidly risen over the last 50 years due to the fact people are eating healthier are more educated on how to stay healthy and the ever advancing technology and knowledge of medicine. People are now also taking early retirement which enables them to visit family or go on holidays within the U.K. (Domestic tourism). Travelling abroad has become much cheaper and easier for older people with companies like saga therefore more elderly people are having holidays abroad more often. 3. Shorter Working Week The number of hours you have to work has been greatly decreased over the last few decades due too new laws and more recently because of the European legislation which was enacted in 1998. What is the working time directive? The European commission introduced the working time directive in 1993 to work alongside member states' employment laws. It is primarily designed to safeguard workers' rights. It sets a maximum on the number of hours that should be worked each week and specifies how long breaks should be, as well as legislating specifically for night time working. Employees have the right to: � A maximum working week of 48 hours � A rest period of 11 consecutive hours a day � A rest break when the day is longer than six hours � A minimum of one ...read more.

These were Dog Lane, High street, Riverside North, Park Lane Welsh Gate and Severnside. These were the results I found in my investigation. Traffic Count These counts were carried out on the same day as the pedestrian count. These counts were carried out 10 minutes before the pedestrian count at 10am, 12pm and 2pm also lasting for 10 minutes. At 10am the greatest number of vehicles entering Bewdley was at Severnside and the least was at Park Lane. The Main type of vehicles was cars because more people have cars than have busses or Lorries. At t 12pm the main location for vehicles was joint between Riverside north and Severnside and the least was at park Lane yet again. So for the last traffic count at 2pm the busiest site was Severnside and the quietest was Park Lane. So the Busiest time is at 12pm but the amount of cars doesn't affect Bewdley as a tourist destination. The results also show that Park Lane is the quietest park of Bewdley in terms of amount of cars on the road. Environmental survey In the Environmental survey we collected data from the 6 locations we had picked to work at. The Cleanest place according to our results was severnside. The Worst location was park lane. Land Use Map We had a map of Bewdley and we found out what each building was used for including Food and Drink, Clothing, Residential and so on. We coloured each building a certain colour depending on what it was used as. ...read more.

got the car from else where and the tax disc may still be the same so it isn't the definite place or where the person is from. With the traffic count some people were just passing though bewdley to make there way to somewhere else so it doesn't all show about the tourism of the village its shows it's useful for people to get from one place to another. If I did the investigation again I think they would have to be a few changes which include spending a longer period of time and to do it at more points around Bewdley so we knew what the whole town was like and not just 6 bits of it but overall it was a good test and we found out a lot about tourism in Bewdley. Closing Statement This coursework has increased my ability in certain tasks such as data handling, presentation and analysis. I have also improved my computer skills and to take observation on my surrounds. During this we didn't really look at the positives that tourism brings to Bewdley even though it out weighs out any negative tourism brings to the town. The data we collected didn't distinguish locals from tourists which doesn't help us find out about just tourism but it is still useful to know about everyone in Bewdley. Tourism doesn't have a negative effect on any place in the world it brings in money to local business which helps the village. So tourism doesn't have a negative impact on Bewdley. ...read more.