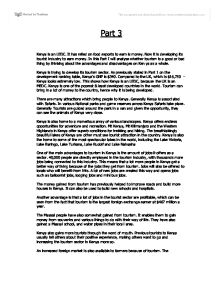 Part 3 Kenya is an LEDC. It has relied on food exports to earn is money. Now it is developing its tourist industry to earn money. In this Part I will analyse whether tourism is a good or bad thing by thinking about the advantages and disadvantages on Kenya as a whole. Kenya is trying to develop its tourism sector. As previously stated in Part 1 on the development ranking table, Kenya's GNP is $340. Compared to the UK, which is $16,750 - Kenya looks extremely low. This shows how Kenya is an LEDC, because the UK is an MEDC. Kenya is one of the poorest & least developed countries in the world. Tourism can bring in a lot of money to the country, hence why it is being developed. There are many attractions which bring people to Kenya. Generally Kenya is associated with Safaris. In various National parks and game reserves across Kenya Safaris take place. Generally Tourists are guided around the park in a van and given the opportunity, they can see the animals of Kenya very close. Kenya is also home to a marvellous array of various landscapes. Kenya offers endless opportunities for adventure and recreation. Mt Kenya, Mt Kilimanjaro and the Western Highlands in Kenya offer superb conditions for trekking and hiking. The breathtakingly beautiful lakes of Kenya are other must see tourist attraction in the country. Kenya is also the home to some of the most spectacular lakes in the world, including the Lake Victoria, Lake Baringo, Lake Turkana, Lake Rudolf and Lake Naivasha One of the main advantages to tourism in Kenya is the amount of jobs it offers as a sector. ...read more.

The Maasai people want to be treated with respect, yet tourism has forced the basic human rights from them. The Maasai people are generally against tourism. A environmentalist would think that the environment as a whole is being damaged, farmland, trees and plants are being cut down to make space for new roads and hotels, therefore, destroying natural habitats. An environmentalist would be against tourism. The government would think that tourism encourages the building of new roads and better communications. Education and health care are improved with money used. It is good for the country and people. National Parks and game reserves protect the land & environment. The environment needs to be protected from overgrazing by farmers, protect the wildlife from poachers killing animals. National parks and game reserves do this. Local people are now able to make more money from tourists than they previously did in farming. It would be in their own interest to help conserve national parks and game reserves. The government would be for tourism. I think that a business man would think that people's business skills will be developed because of the creation of new jobs. Jobs will be created in sectors such as services, hotels and restaurants. A local food demand is created by tourists, helping farmers sell more. A business man would be for tourism. I think that a concerned tourist would think that they are concerned about Kenya's developments in tourism. Safari minibuses disturb animals, and cause soil erosion. Hot air balloons also disturb the wildlife. In some areas, wild animals often move outside the reserves, destroying farmers crops. ...read more.

This is where I think that the tourist industry should be developed differently in the future. A sustainable way of tourism in Kenya should be introduced, so it can benefit from tertiary jobs, foreign money for development, but at the same time not damaging the eco-system or exploiting civilians in the country. This means using resources wisely, so that the environment is not damaged. Sustainable tourism is using and enjoying the environment, whilst preserving it for future generations. This will help to reduce the negative impacts of tourism in Kenya. Ecotourism can help Kenya in the following ways: * Education - tourists and local people should be aware of ecotourism, telling them that visitors to an area is limited, so vegetation will be re-grown in trampled areas. * Resources - Controlling resources carefully, using fewer, low-energy vehicles, recycling materials and growing organic foods. By encouraging tourists to eat local, not imported food - it will help the environment and help local people to get an income * Traditions - Local people will be allowed to continue there 'tried and tested' methods of agriculture. Revitalize traditional crafts such as wood carving, therefore allowing local people to develop their skills and earn a living * Money - This all does sound rather simple, but caring for the environment does cost money. Part of the income from tourism can be used for this. If many foreign ownership companies provide money to help support the environment, they are more likely to respect the local people, the environment and most of all make more money by promoting the environmentally friendly Kenya. ...read more.