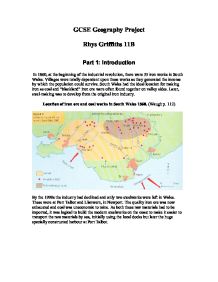 GCSE Geography Project Rhys Griffiths 11B Part 1: Introduction In 1860, at the beginning of the industrial revolution, there were 35 iron works in South Wales. Villages were totally dependent upon these works as they generated the income by which the population could survive. South Wales had the ideal location for making iron as coal and "blackland" iron ore were often found together on valley sides. Later, steel-making was to develop from the original iron industry. Location of iron ore and coal works in South Wales 1860. (Waugh p. 112) By the 1990s the industry had declined and only two steelworks were left in Wales. These were at Port Talbot and Llanwern, in Newport. The quality iron ore was now exhausted and coal was uneconomic to mine. As both these raw materials had to be imported, it was logical to build the modern steelworks on the coast to make it easier to transport the raw materials by sea, initially using the local docks but later the huge specially constructed harbour at Port Talbot. Blast Furnaces at the Port Talbot Steelworks Nov. 2002 Why did the industries such as coal and iron decline? The old industries declined for many reasons, one of them being that there was a change in fuels available. Oil and gas were increasingly being used for power which left less need for coal. Also the British Empire started to decrease which led to markets for coal collapsing. As other countries developed their own industries there was also more competition from abroad. In some cases they could do it cheaper and cost effectively. As well as that most people started to use gas for domestic fuel (cookers and central heating), and it became more attractive than coal. As the iron, steel and coal industries declined, high- tech industries took over and business and science parks were built as part of inner city redevelopment schemes. ...read more.

Who has more expensive houses? I have collected some copies from the "Property News" for the Bridgend area to compare the prices of houses and I have discovered that the most expensive houses are in the south although there are some expensive houses in the north. A reason for the expensive houses in the north is that there are beautiful views as shown in the picture overleaf. Ogmore Vale If you compare two similar structured houses (see photographs overleaf) you see that the houses from the south are much more expensive. For example, we can compare two similar terraced houses. In the South, in Coity Road, Bridgend, a modernized house priced at �84,950 with 2 bedrooms, a bay window and uPVC double glazing. While in the North, in Victoria Street, Caerau, a house priced at �28,000 with 3 bedrooms and uPVC double glazing. It costs �56,950 more to have a convenient spot and a modernised house in the south. These two examples show that it is much more expensive to live in the south. But why do people still pay for these expensive houses when they can get them for almost half the price in the north? They do because of: o More job opportunities o Better and more leisure facilities. o Travelling distances are less and roads more accessible It is because of the above reasons that demand for houses in the south is greater than the north. Therefore the greater the demand the higher the asking price because people are prepared to pay for the ideal location. South: Coity Road, Bridgend. �84,950 with- 2 bedrooms, bay window and uPVC double glazing, modernised North: Victoria Street, Caerau. �28,000 with- 3 bedrooms, uPVC double glazing. Is there more crime in the north or the south? When I came to research my answer for this question I realised that I did not have that much information to answer it so I looked for crime statistics on the internet using upmystreet.com and the South Wales Police website. ...read more.

Part 6: Evaluation I feel that my data was relevant and accurate to answer most of the questions I posed especially that of the 1991 Census. However, in making my judgements I need to bear in mind that the statistics extracted from the census were from 1991 and are therefore quite out of date. It would have been better for me to have used the most recent census of 2001. The data collected from the environmental quality survey was useful in that it gave me quantifiable data to judge what would otherwise be subjective issues. By using quantifiable data in this way it helps to avoid any bias in my judgements. It was also recently collected data. (Autumn 2002) My greatest difficulties were in addressing the issues on crime in the borough as I was unable to obtain statistics about the amount of crime committed within each ward or by the people living in each ward, so I have taken pictures of crime (e.g. graffiti, dumped rubbish and abandoned cars) that I could find and studied the local newspapers for crimes committed, I used this to produce a suitable answer to my question "Is there more crime in the north or south?". I still think my sample was too small but this could be improved upon if I were to investigate in more depth. If I were to further my study I think I would conduct a survey or investigate in more depth the crime rates of the north and south of Bridgend. It was difficult to avoid bias in this case as statistical evidence was not available. My analysis of property prices was based on a limited sample. I feel that a more thorough analysis of the property market would have given me stronger evidence for my claims. This would have meant using a much larger sample of comparable properties. The issue of people travelling to work was not conclusive. In addition there are a variety of reasons why people would use cars to travel to work and many of those reasons will not necessarily indicate a better quality of life. ...read more.