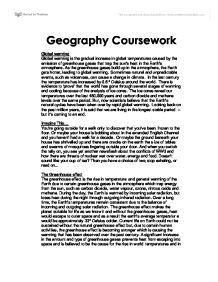 Geography Coursework Global warming Global warming is the gradual increase in global temperatures caused by the emission of greenhouse gases that trap the sun's heat in the Earth's atmosphere. As the greenhouse gases build up in the atmosphere, the Earth gets hotter, leading to global warming. Sometimes natural and unpredictable events, such as volcanoes, can cause a change in climate. In the last century the temperature has increased by 0.6 � Celsius around the world. There is evidence to 'prove' that the world has gone through several stages of warming and cooling because of the analysis of ice cores. The ice cores reveal our temperatures over the last 450,000 years and carbon dioxide and methane levels over the same period. But, now scientists believe that the Earth's natural cycles have been taken over by rapid global warming. Looking back on the past million years, it is said that we are living in the longest stable period - but it's coming to an end. Imagine This... You're going outside for a walk only to discover that you've been frozen to the floor. Or maybe your house is bobbing about in the extended English Channel and you haven't had a walk for a decade. Or maybe the ground beneath your house has shrivelled up and there are cracks on the earth the size of tables and swarms of mosquitoes lingering outside your door. And when you switch the telly on, you see yet another newsflash about the conflicts of WW3 and how there are threats of nuclear war over water, energy and food. Doesn't sound like your cup of tea? Then you have a choice of two; stop exhaling, or read on... The Greenhouse effect The greenhouse effect is the rise in temperature and general warming of the Earth due to certain greenhouse gases in the atmosphere which trap energy from the sun, such as carbon dioxide, water vapour, ozone, nitrous oxide and methane. ...read more.

Darren Dibungho, a climate scientist at the University of Reading, said, "If the annual average temperature in Greenland increases by almost 3� Celsius, its ice sheet will begin to melt. It has been calculated that around the year 2100, concentration of carbon dioxide in the atmosphere will have reached levels where there is a high likelihood of Greenland melting." Other results of global warming include a rise in the ranges of disease vectors and genus extinction. There are various new diseases that have emerged lately due to global warming and they are occurring frequently. But more will be at risk of catching insect-borne and water-borne diseases such as malaria and cholera. Already species like golden toad, the harlequin frog of Costa Rica, has become extinct as a result of global warming. There are also a number of species that are in danger of extinction due to global warming. Marine life is also sensitive to the increase of temperatures, and the effect of global warming will soon be seen on some species in the water. It is expected that many species will become extinct due to the rise in the temperatures of the water, whereas various other species, which prefer warmer waters, will increase immensely. It is expected that the coral reefs will die off as a result of global warming. But unlike some creatures, global warming is extending the distribution of mosquitoes because of the increase in humidity levels and their frequent growth in the warmer atmosphere. Global warming is expected to cause irreversible changes in the ecosystem and the behaviour of animals. Wildlife and plants may not have time to adapt to the change that will take place in ecosystems at all levels; there are already visible effects of this because trees are coming into leaf and birds are laying their eggs much earlier in the year. It is said that the effects of global warming will be more apparent to LEDC's because of water and food shortages, natural disasters and diseases. ...read more.

altogether. We can achieve slowing down the process by energy conservation, including better use of public transport and cleaner more efficient cars with lower carbon dioxide emissions. Also, we can turn to other energy sources such as solar, wind and wave power. Nuclear power is a possibility as it does not emit any carbon dioxide and could replace other forms of energy, but it would be necessary to find a way of safely disposing of the radioactive waste because it can remain dangerous for hundreds of thousands of years. For these alternative and renewable energy sources to be used there would have to be a rise in taxations to fund them. If global action was to be taken and the trading of carbon units between countries was to be made illegal, then emissions would decrease slightly. But, a main way of preventing further global warming would be policies to save energy that were enforced by the government, such as better home insulation, investment in 'cleaner' fuels and energy efficient cars. Also, when new houses are built, they should be built by default with energy saving strategies such as water butts which conserve rainwater for garden use and solar panels which generate light and heat in the home from solar energy. Editorial Global warming is not something that we as a world community can ignore. Some people insist that it is a part of the Earth's natural cycle and that changes alike to those happening today have taken place naturally in the 4600 million years that the Earth has been here without the "" of human activity. However, today the world experiences extreme events such as earthquakes, tornadoes and other devastating disasters. Alaska is positive proof that we need to do something about global warming; lakes are receding, animals are in danger and it's less of the arctic state that we know it as. If we ignore global warming, then in a hundred years or so, the sea that surrounds the United Kingdom will have started to eat away at ?? ?? ?? ?? ...read more.