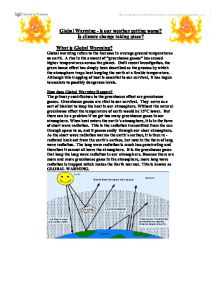 Global Warming - is our weather getting worse? Is climate change taking place? What is Global Warming? Global warming refers to the increase in average ground temperatures on earth. A rise in the amount of "greenhouse gasses" has caused higher temperatures across the planet. Until recent investigation, the green house effect has simply been described as the process by which the atmosphere traps heat keeping the earth at a livable temperature. Although this trapping of heat is essential to our survival, it has begun to escalate to possibly dangerous levels. How does Global Warming Happen? The primary contributors to the greenhouse effect are greenhouse gasses. Greenhouse gasses are vital to our survival. They serve as a sort of blanket to keep the heat in our atmosphere. Without the natural greenhouse effect the temperature of earth would be 15�C lower. But there can be a problem if we get too many greenhouse gases in our atmosphere. When heat enters the earth's atmosphere, it is in the form of short wave radiation. This is the radiation transmitted from the sun through space to us, and it passes easily through our clear atmosphere. As the short wave radiation warms the earth's surface, it is then re-radiated back out from the earth's surface, but now in the form of long wave radiation. ...read more.

But despite this ban many still misuse CFCs and pollute the environment further. There are also some natural causes such as cattle farming which means breeding cows that give out a lot of methane through egestion. Another natural cause is release of methane gas from arctic tundra and wetlands which also play small part in warming up the planet. All of these causes have resulted in extreme weather which has hit countries all around the world, here are a few examples similar to those mentioned earlier. * November 1999- Cyclone hits Orissa and 20,000 die in floods * August 1999- Heatwave kills 271 people in Texas. * Drought in Indonesia helps forest fires to spread smog over South East Asia. Pollution from Factories. The effects of Global Warming There can be many effects of global warming on the planet some of which I've probably already mentioned when providing evidence for global warming. The most common and devastating effect is extreme weather which includes hurricanes, droughts, snowstorms, heatwaves and other natural phenomenon. Storm strength leading to extreme weather is increasing, and claims millions of lives each year but even more are left homeless. Worldwide, the proportion of hurricanes reaching categories 4 or 5 - with wind speeds above 56 metres per second - has risen from 20% in the 1970s to 35% in the 1990s. ...read more.

By putting energy efficiency, renewable energy, and vehicle technology solutions in place, we can reduce our contribution to global warming while creating a stronger, healthier, and more secure nation. Renewable energy sources like Wind power could help reduce global warming. Statistics and Graphs Here are some stats and graphs to emphasise the importance of global warming. As you can see the the levels of CO2 have risen dramatically from the 19th century up to the 21st century. This is largely because of the Industrial Revolution which happened in the 1800s and also because of pollution from vehicles and factories in the past 100 years. This graph shows the result of the rising CO2 levels and as you can see the general trend of the graph is up. Global temperatures continue to rise briskly and if we don't do something soon it could turn into global catastrophe. Just to highlight the fact that humans need to stop producing greenhouse gases quickly here are some alarming stats: * Carbon dioxide, methane and nitrous oxide have increased by 30, 100 and 15% respectively * Worldwide, sea level has risen roughly 15-20 cm in the last century. Approximately 2-5 cm of the rise has resulted from the melting of mountain glaciers. * About 105 of North America's plant species could be threatened by an increase in temperature as minimal as 3�C. ...read more.