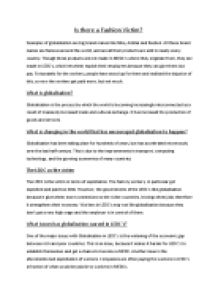 Globalisation and Clothing Production. Is there a Fashion Victim?

﻿Is there a Fashion Victim? Examples of globalisation are big brand names like Nike, Adidas and Reebok. All these brand names are famous around the world, and are all their products are sold in nearly every country. Though these products are not made in MEDC's where they originate from, they are made in LEDC's, which lets them exploit their employees because they can give them low pay. Fortunately for the workers, people have stood up for them and realised the injustice of this, so now the workers get paid more, but not much. What is globalisation? Globalisation is the process by which the world is becoming increasingly interconnected as a result of massively increased trade and cultural exchange. It has increased the production of goods and services. What is changing in the world that has encouraged globalisation to happen? Globalisation has been taking place for hundreds of years, but has accelerated enormously over the last half-century. This is due to the improvements in transport, computing technology, and the growing economies of many countries. The LEDC as the victim The LEDC is the victim in terms of explotation. The factory workers, in particular get exploited and paid too little. However, the governments of the LEDC's like globalisation because it gives them more connections to the richer countries, it brings them jobs therefore it strengthens their economy. ...read more.

According to libertarians, globalization will help us to raise the global economy only when the involved power blocks have mutual trust and respect for each other?s opinion. Globalization and democracy should go hand-in-hand. It should be pure business with no colonialist designs. Are there any good companies? Globalisation is having a marked effect on workers worldwide. The advance of deregulation, privatisation and free trade is changing the nature of work and the lives of people everywhere. Trade unions are challenging the adverse effects of this on pay and conditions of employment, while at the same time working to achieve a high quality of life for everyone. UNISON, working with other trade unions and campaigning groups, is at the forefront of this struggle. UNISON is committed to the principles of fair trade - products which are produced and sold according to international standards which guarantee that the producers get a fair price for their output. They work closely with the Fairtrade Foundation to promote fair trade products in our workplaces, homes, UNISON offices and at UNISON events. I think if there was to be a victim due to globalisation, it would be our planet. Some may say that the factory workers are the victims because they get exploited and paid too little, but without the opportunities for jobs produced by big companies using factories in these lower economically ...read more.

Without the money that these companies are contributing to the economy of these LEDCs these factory workers would have no jobs and no money, and slowly as more and more money is made in these countries their industries will grow and grow until they are as rich as some MEDCs like many countries in Europe and America. To speed up this process, large companies could pay factories a little bit extra money so that they can employ more workers, or perhaps pay the workers more, to help reassure us, as the customers, that the products we buy are made in ethical and appropriate conditions. My thoughts I think if there was to be a victim due to globalisation, it would be our planet. The amount of pollution produced by transporting and producing these products has had and is having a stong effect on our planet. As a result of globalisation a large number of industries are setup all over the world. For setting up of industries newer areas had to be discovered, so people started destroying large forest lands such as the Amazon. Rapid destruction of forests caused serious threat to both plants and animals. Many species of plants and animals have become extinct and many are endangered. ...read more.