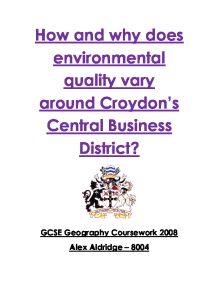 How and why does environmental quality change around Croydon?

Higher numbers of CCTV cameras and police patrols in the CBD will also deter potential graffiti artists. I was surprised to see that the area around point 8 had such high graffiti levels, especially when similar points nearby showed relatively little or no signs at all of graffiti. However, with West Croydon Station so close by, it would appear that this is the cause of the surge in graffiti. I believe that the large numbers of people who use the station as their gateway to Croydon make the area especially hard to police in terms of street cleaning. It would also appear that West Croydon has less high-order shops than in the CBD and that the land value is significantly lower, meaning the local council is likely to provide the area with less maintenance services. Figure 3.2: Graph showing average graffiti levels in Croydon. Figure 3.2 displays a fairly predictable set of results. It shows that Zone 3, an area with a relatively high pedestrian count but low land value, has significantly higher graffiti levels that the rest of Croydon. This is because the area is neglected by the council's maintenance team but still attracts large numbers of criminals to the area. This may be due to the fact that Zone 3 is a 'zone in transition' - still in the town centre, but away from the busy high street. Because there are fewer large department shops nearby, less CCTV cameras are located there. Zone 5 has the lowest graffiti levels in Croydon because it has an extremely low pedestrian count. It is far away from the town's shopping centre which is what draws people to the CBD in the first place and has relatively low crime levels. Zone 1 has above average graffiti levels, but this was to be expected because of the sheer numbers of pedestrians who are found in this area. ...read more.

I took extra care while recording my data to and tried to do as many repeat tests to keep any anomalous results to a bare minimum. I believe that the data collected for my first hypothesis (graffiti levels decrease with distance from the CBD) was probably the most accurate. I believe this to be the case because I counted the 'tags' with one other person, meaning we could double check numbers with each other before leaving each transect point and writing down our results. This meant that if we had two totally different figures we could repeat the experiment again until we were confident that we had counted the correct number of 'tags'. Unfortunately I think that my third and original hypothesis may have produced the least accurate data. Discarded chewing gum that has been trodden into concrete over time is hard to identify while walking along a busy street, meaning at times I had to rely on my own judgement and allow for human error while carrying out that particular part of my investigation. However, I believe that the conclusion I arrived at to be the correct one. I believe I may have been able to improve my methods and consequently improve my results by doing more repeats. However I am confident that, having compared data with my fellow peers, that my results share similar trends to the results of others. These trends are what my conclusions are based on and I therefore believe that my conclusions are valid. Some further research, perhaps into air quality, carbon dioxide emissions and crime rates may have slightly improved my investigation, although I would be surprised if this information would alter my conclusions or change any trends. As my investigation was carried out over the period of just a single day, I expect that my results would not be of much use to any other organisation e.g. Croydon Council, who I am sure carry out similar surveys themselves. ...read more.