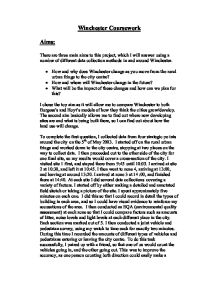 Winchester Coursework Aims: There are three main aims to this project, which I will answer using a number of different data collection methods in and around Winchester. * How and why does Winchester change as you move from the rural urban fringe to the city centre? * How and where will Winchester change in the future? * What will be the impact of these changes and how can we plan for this? I chose the top aim as it will allow me to compare Winchester to both Burgess's and Hoyt's models of how they think the cities grow/develop. The second aim basically allows me to find out where new developing sites are and what is being built there, so I can find out about how the land use will change. To complete the first question, I collected data from four strategic points around the city on the 5th of May 2003. I started off on the rural urban fringe and worked down to the city centre, stopping at two places on the way to collect data. I then proceeded out to the other side of the city for one final site, so my results would cover a cross-section of the city. I visited site 1 first, and stayed there from 9:45 until 10:05. I arrived at site 2 at 10:30, and left it at 10:45. I then went to zone 4, arriving at 13:00, and leaving at around 13:20. I arrived at zone 3 at 14:00, and finished there at 14:40. At each site I did several data collections covering a variety of factors. I started off by either making a detailed and annotated field sketch or taking a picture of the site. I spent approximately five minutes on each one. I did this so that I could record in detail the types of building in each area, and so I could have visual evidence to reinforce my accusations of the area. ...read more.

Conclusion for Traffic Survey These traffic surveys show us that there were far more vehicles than pedestrians in the suburbs of Winchester and far more pedestrians than vehicles in the centre. Relating back to Aim 1: How and why does Winchester change as you move from the urban rural fringe to the city centre. This shows us that the traffic thins out as you get to the city centre, although that could have had something to do with the timing of the surveys as I started in the first zone during the rush hour and finished the last zone around lunch time. The graphs also give us a very clear idea of what types of vehicle are travelling around, and clearly show that cars are by far the most common, followed by slightly larger vans and lorries. Land Use Survey for Zone 1 This map shows that there is a great deal of housing in the outer suburbs. This is also supported by Burgess's model, where all the expensive, well cared-for housing is in the edge of the settlement. The flats in the top right corner are developing into even more housing, to add to the very large quantity of terraced housing there is. The only other types of buildings on the map are small businesses, proving that the outer suburbs are really dominated by housing. Land Use Survey for Zone 2 As we move further into the city, into the inner suburbs, you can see immediately that there is far less housing than in the outer suburbs. This area still has a lot of housing in it, mainly terraced and a small amount of detached housing. There are also far more businesses than in Zone 1. Examples of the latter include a garden centre and two pubs. There is also Winchester Prison and the Hampshire County Council Headquarters. The land use is turning less towards housing and more towards small businesses and public services. ...read more.

You wouldn't be able to build cheap housing here because of its location, so it would probably be economically best to build luxury flats or large houses. Evaluation There are several factors of my data collection that I do not believe are completely accurate. The first and most important thing would be that doing the same teats at different times of the day would give unfair answers. Ideally I would have to do all the traffic counts, for example, on the same day at the same time, because the traffic flows might be completely different on a Monday compared to a Tuesday. Another problem I found was counting pedestrians in the CBD. Because of the large numbers it would easily have been possible to miss one person walking behind another through human error. I could have countered this by taping the two minutes so that I could then look back at it and count them as many times as necessary. If I got any results wrong, then there is a great chance that something in my conclusion could be wrong as well. If I had mistaken one type of building for another during the land use surveys, I would have ended up with the wrong majority of building type, throwing my conclusions into inaccuracy. If I had to do this study again, there would be a few things I would change, apart from those mentioned above. I would use more sites at various points throughout the city, as this would hopefully give me more accurate results to work with. I would also conduct a study at a dormitory settlement near Winchester, such as Twyford, to see how it compares. I also think I could have investigated more topics, such as land value and building value throughout the city. This would then allow me to be able to see how prices should be far greater in the centre than at the outskirts, proving the theory about large houses being built on the cheap land. ...read more.